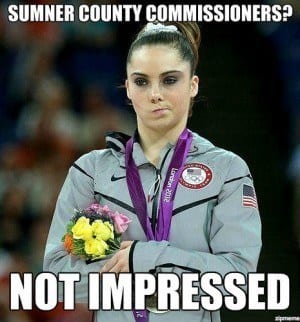 McKayla Maroney, famous for being a part of this year’s gold medal-winning U.S. women’s gymnastics team as well as for her “not impressed” face, is set to appear on an upcoming episode of Hart of Dixie. She will guest star as Tonya, a girl who comes to the defense of her friend, Rose on Season 2 of the CW show.

The gymnast sent out a series of tweets regarding her experience on the show so far. Just yesterday, she tweeted “Good day on the set for #HartofDixie..Everyone was so nice, and I had so much fun!! Can’t wait for it to come out.”

She also poked fun at herself in a twitter picture saying “Caught Rachel Bilson doing the “not impressed” face in one of her earlier episodes from #HartofDixie! #caughtYOUgirl..”

The Olympic gymnast may have even picked up a bit of a southern accent from her time on the show. Maroney tweeted “I can’t stop talking in my Southern accent, thanks to #HartofDixie haha..Hope everyone likes the episode! So excited for it to come out!”

No date has been set yet for Maroney’s episode. However, the series will premier its second season on October 2 at 8 p.m.

Maroney isn’t the only Olympian to appear on TV, however. The CW also picked up Ryan Lochte to appear as himself in an upcoming episode of 90210. Gabby Douglas has also been selected to appear for a guest role on The Vampire Diaries.