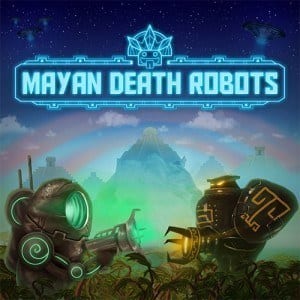 You’ve got to respect a developer who isn’t afraid to tell you the truth regarding their reason for creating a game. At PAX East 2015 I met with Seleni Studios, the developer behind Mayan Death Robots, a fun, new multiplayer game similar to Scorched Earth or Worms. The explanation for how the game came into existence is only part of the reason why it’s so compelling though. According to Lead Designer Karel Crombecq, he was a huge fan of this genre, particularly Worms, but was frustrated by seeing what was essentially the same game put out time and time again, with only slight changes to the gameplay. I’m paraphrasing of course, but instead of simply complaining, like most of us do, Crombecq decided to do something about it.

That something is Mayan Death Robots.

With multiple robots to choose from, there’s enough variation to make for a decent game of cat-and-mouse, but not so many that you become overwhelmed with options. Of note: no microtransactions, so don’t worry about someone having access to a robot you don’t have. The objective is not to destroy your opponent’s robot, surprisingly. Instead, you each have a “box,” (for lack of a better word) that you’re trying to protect, while trying to destroy your opponent’s. The box can be destroyed by direct shots, falling damage, or you can dig it right through the map and have it fall out of play. Whoever does it first wins!

Each player is presented with three options at the beginning of the turn, which run concurrently and not one at a time, so all players choose and execute at the same time. Your options are jump, allowing you to move your robot around the battlefield. Combat, which sometimes consists of using the robots specialized weapons or a random weapon that sometimes gets thrown in, but is useable by both players. Or build, a wonderful tactical option. Build allows you to place additional “earth” on the map, which gives you the option of closing in your box as a defensive measure, or you can box in your opponent if you want to be a prick.

I boxed in my opponent and was subsequently called out for my “prickishness.”

The game isn’t particularly difficult to play, one of the staples for any good multiplayer title, but the slight randomness, robot abilities, and array of maps makes it a title that’s going to be hard to master. With indie titles on full display at this year’s PAX East, it would have been easy to overlook Mayan Death Robots were it not for the beautiful color scheme, passionate developer, and the small crowd gathered at the booth shouting “OH!” and “AWWW!”

Mayan Death Robots is set to release later this year on Steam, but you can download the demo now.