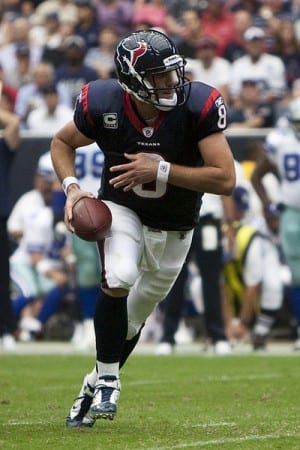 The Texans’ Matt Schaub injured his foot significantly, taking him out of at least the next two games, and leaving Matt Leinart to take over as starting QB.

The LA Times reports that Leinart, who has served as Schaub’s backup the last two seasons, commented on the situation, saying, “It’s a huge opportunity for me. I’m really bummed for Matt. We’ve become very close the last year and this year. He’s the leader of this football team and he’s done a great job in the 4 to 5 years he’s been here to get us to this point…. But he knows and everyone knows in this profession that things happen and the next guy has to step up.”

The AP reports that Schaub was injured on a quarterback sneak coming out of the end zone late in the second quarter of Houston’s 37-9 victory over Tampa Bay on Sunday.

Coach Gary Kubiak commented on Schaub’s injury, saying, “He’s got a significant foot injury, he’s going to miss some time. But we’re going to do everything we can to get it evaluated correctly and see if can get him back on the football field. It’s disappointing,” Kubiak said, “but we’ll go to work and try to do the right thing by Matt.”