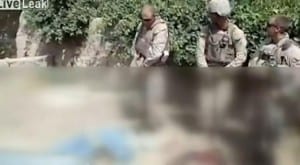 A video said to depict U.S. Marines urinating on Taliban corpses has drawn condemnation from American officials, NATO authorities and the Afghan government.

The New York Times reports that the video reportedly shows four Marines urinating on the corpses of three Taliban members. One of the men says, “Have a great day, buddy.”

“A video recently posted on a public Web site appears to show U.S. military personnel committing an inappropriate act with enemy corpses,” NATO said in a statement. “This disrespectful act is inexplicable and not in keeping with the high moral standards we expect of coalition forces.”

Secretary of Defense Leon E. Panetta said in a statement: “I have seen the footage, and I find the behavior depicted in it utterly deplorable. I condemn it in the strongest possible terms. I have ordered the Marine Corps and I.S.A.F. Commander General John Allen to immediately and fully investigate the incident. This conduct is entirely inappropriate for members of the United States military and does not reflect the standards or values our armed forces are sworn to uphold. Those found to have engaged in such conduct will be held accountable to the fullest extent.”

The Taliban has also reacted to the video, saying, “This is not the first time we see such brutality,” said the spokesman, Zabihullah Mujahid. “We know that our country is occupied.”

The Afghan government has asked for an investigation, and for anyone found guilty to be severly punished.

The video of the Marines urinating on Taliban corpses has made its way to YouTube and LiveLeak.

Read more about the video here.