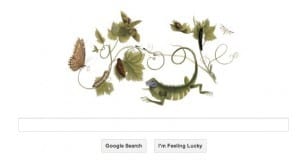 Maria Sibylla Merian’s 366th birthday was celebrated yesterday with a Google doodle. Merian was a botanical artist who documented the metamorphosis of the butterfly and made contributions to the field of entomology. The doodle had an earthy theme and featured a lizard, leaves, caterpillars and butterflies.

Merian was born April 2, 1647 in Frankfurt, and when she was 13, she began painting insects and plants at the suggestion of her stepfather, Jacob Marrel.

Merian documented her childhood experiences in a book, expressing how interested she was in insects. She collected silk worms, caterpillars, butterflies and moths. Her interest eventually stuck with caterpillars after she realized how they transformed.

Merian published “Neues Blumenbuch” or “New Book of Flowers” across three volumes from 1675-80 and “The Caterpillar’s Marvelous Transformation and Strange Floral Food” in 1679.

Her books were popular in high society and not popular in the scientific community because she published them in vernacular language instead of Latin, which was the accepted scientific language of the time.

Merian traveled to South America to study local animals and plants there, which was unusual for a woman of her time to do. When she returned to Amsterdam, she wrote “The Metamorphoses of the Insects of Suriname,” which was published in 1705.

Merian compiled evidence that worked to debunk the common belief that insects were born from spontaneous generation.

Merian married her stepfather’s apprentice, Johann Andreas Graff, and the couple had a child together.

This was the first Google doodle dedicated to Merian.