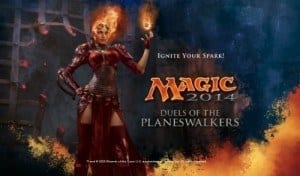 One of the most difficult things to do in gaming is to commit to an annual release and entice players to come back year after year. Very few franchises have the courage to attempt it, with fewer reaching success, which is why upon seeing Magic the Gathering 2014 Duels of the Planeswalkers at PAX East, fans of the series were pleasantly surprised. Building on the the years past, the team at Wizards of the Coast has taken an active approach to implement engaging story and has, for the first time, made a specific Planeswalker the focal point of the overarching story.

Chandra Nalaar, the redhead with attitude and complete control of fire, is taking center stage with  campaign spanning online and offline. Despite the aforementioned difficulties that Magic the Gathering inherently presents, specifically the danger of redundant gameplay, the game will introduce ten brand new decks, including cards from the Magic 2014 Core Set, to play with. In addition to the new cards, 25 new encounters and puzzle challenges and a brand new game mode await those wanting to test their mettle against the AI.

With three years of digital releases under their belt, the team bringing Magic the Gathering will continue to support Xbox Live Arcade, Playstation Network, PC (Steam), and iPad. This year though, much to the delight of fans, the game will release on Android devices. As one of the most popular card games available today, Magic the Gathering has over 12 million players worldwide and delivers more than 12,000 individual cards for gameplay. Though previous releases have appealed mainly to fans of the series, the integration of a new story, new game modes and appearing on new devices is sure to drive fans both old and new to see just what Magic the Gathering 2014 Duels of the Planeswalkers is all about.

You can view the trailer by clicking here.