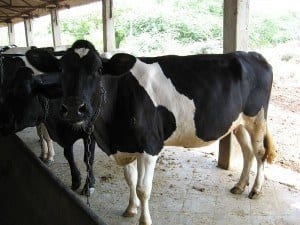 USDA will weed out cows from the same herd.

Mad cow disease has been detected in a cow in California.

This is the first incident of mad cow disease since 2006. Now, the U.S. Department of Agriculture (USDA) is searching for possible offspring of the dairy cow that has contracted mad cow disease. It’s believed that these animals also could have been infected with the brain-wasting ailment.

Officials said the infection was detected at a California rendering plant, but no meat from the cow had entered the food supply. The animal was said to have had a rare form of mad cow disease, also known as bovine spongiform encephalopathy, that is caused by spontaneous mutation. That means the animal did not get the disease from contaminated feed.

As part of the investigation of the matter, the USDA will find out when and where the cow was born and will try to remove animals that were in the same herd.

The USDA began testing more cattle for mad cow disease after the first detection in the U.S. in 2003. Now they test 40,000 cattle a year, out of the nearly 34 million cattle slaughtered in the U.S. annually. The testing is meant to focus on older or sick cattle that are most likely to be infected.

How do people become infected with mad cow disease? They get it from eating meat infected from a cow. However, there is no imminent danger currently. No meat from the infected cow made it into the food supply, and it is not likely that it was ever meant for human consumption.

High-risk cattle parts were removed from the human food supply and from all animal feed more than a decade ago to protect against the spread of mad cow disease. Feed was considered the main cause of the British mad cow disease epidemic that occurred in the 1980s and 1990s. More than 150 people died of the human strain of the disease, Creutzfeldt-Jakob disease, after eating meat from an infected cow.

Studies show that the human strain of mad cow disease can’t be caught by drinking milk. The disease affects the nervous system, and there’s no evidence that it has ever been transmitted by drinking milk.

The first time mad cow disease appeared in the U.S., beef exports plunged 82 percent. The initial report of this particular case sent cattle futures prices falling Tuesday, but Wednesday the prices rebounded after the USDA assured that no meat from the cow was in the food supply. Experts do not believe that a single case of mad cow disease will threaten the beef industry.