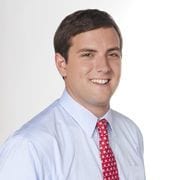 NBC correspondent Luke Russert speaks with us about politics, interning at NBC and his memories at Boston College

For Luke Russert, a passion for journalism runs in the family. The son of longtime “Meet the Press” moderator Tim Russert and Vanity Fair correspondent Maureen Orth, Russert has risen from intern to Capitol Hill correspondent. He cut his teeth interning for “Late Night with Conan O’Brien” and Mayor Bloomberg, and his hard work paid off when he worked as a special correspondent for NBC and covered the 2008 election and the youth vote. I recently spoke with the 26-year-old Boston College alum to get his take on the 2012 election, the youth vote and his favorite memories at BC.

You studied at Boston College and graduated in 2008. What did you major in?

I was a double major in History and Communications.

What is your favorite memory of your time there?

It sounds clichéd, but honestly it was the friendships. Three years later I rarely remember a thing I learned in intro to “Philosophy of a Person” or “Writing Seminar 101,” but I can recall many engaging political, sports and cultural conversations among roommates that went late into the night, as well as a few spirited evenings surrounding BC victories.

Were you very involved with the campus (e.g. were you part of any organizations, student bodies, etc.)?

I worked to get politicians to come to campus. I got Sen. Chris Dodd and Sen. Sam Brownback to come when they were running for president in 2007. I also spent a lot of time of trying to drum up school spirit for sporting events. When I was a senior, we were ranked as high as second in the nation in football. That was probably because of our Heisman candidate and future first round draft pick Matt Ryan, but I like to take some credit.

What was it like interning for NBC? What were some of the projects they had you work on?

When I interned for NBC, I interned for “Late Night with Conan O’Brien.” While I had been surrounded by political media my entire life, it was my first experience with show biz on a personal level. I think I decided after week three that entertainment wasn’t for me because it was so much style over substance. That being said, I thought Conan was brilliant and very much enjoyed hearing his perspective on celebrity culture.

You also interned at Mayor Bloomberg’s office. What was that experience like? What projects did you work on during your time there?

I was there in the summer of 2007 and at that time there was a lot of speculation that Bloomberg might run for president. Needless to say, many folks wanted to have a meeting with the mayor and I was assigned to research them, vet them out in a way to make sure there was nothing that could embarrass the mayor. I also had to get the senior staff lunch, which once included the mayor’s lunch, so that was a thrill.

I know you’re a huge sports fan, so what was it like to work on “Pardon the Interruption?”

Without doubt it the most fun job I have ever had. Usually in TV, the folks in front of the camera are totally different off of it. For Tony and Mike, what the viewer sees is what they are like 24/7. The staff at that show operates as a family. From the executive producer to the intern, everyone is treated with equal respect. It was a surreal feeling having Mike Wilbon asking me for my opinion on a show topic at age 19 and valuing my input.

What was it like to cover the 2008 election, since so much emphasis was placed on our demographic — the youth vote?

Well, the youth vote turned out to be a very important story. It helped put Obama over the top and turned states like Indiana, North Carolina and Virginia Democratic for the first time in decades. The part of it that I enjoyed the most was meeting kids at college campuses all over the country. They were so motivated and engaged. I hope that same passion shines through among young people on both sides of the political aisle come November 2012.

What has it been like being a regular NBC correspondent?

Well, now I cover Capitol Hill primarily, with a few special projects thrown in so I wouldn’t say I’m general assignment. There is nothing like driving to the Capitol every morning — a building in Washington that is the apotheosis of western democracy. Covering the men and women who craft the nation’s laws and influence the future direction of the country is a great responsibility that I feel is an honor to have. So I’d say it’s pretty thrilling.

What have been the most interesting stories that you’ve covered since becoming a correspondent?

I always find political stories fascinating but the ones I find most interesting are ones that have to do with weather. I’ve covered two hurricanes since I’ve been at NBC, Gustav in 2008 and Irene in 2011. In both of those storms I met families who had seen their homes damaged and in some cases completely destroyed. Yet there is always a sort of resilience once they realize they survived, and it’s that type of human spirit you only see during disaster or trying times, not in politics. I like being close to that feeling of emotion. It’s an honor as a reporter.

Recently, Congress’ approval rating has hit an all-time low at 14 percent, a figure that has, no doubt, been affected by the recent debt ceiling debacle. What was it like covering those talks?

The debt limit crisis was probably one of the most depressing stories I have ever covered. I had a front row seat to watch our nation on the brink of a breakdown. Thankfully cooler heads prevailed and we didn’t see a downgrade of our credit rating. I think it says a lot about the state of our politics when both sides are clearly more concerned about protecting their own special interests and their own ability to get elected before the health of the nation.

Given the state of the Democratic, Republican and, now, Tea Parties, what do you anticipate the 2012 election will bring? Will there be just as much of a push, as in the last few elections, for youth voters to rise to the occasion?

The youth vote surely didn’t turn out for the 2010 midterms like it did for 2008 presidential election. A lot of that was apathy among young voters who came out for Obama in 2008, but that hadn’t seen enough change. That being said, presidential election years have a larger turnout than midterms.

I think Obama’s strategy is contingent upon turning out young people and getting them to the polls. Without them, he has a steep climb in swing states like Ohio, Virginia, Florida, North Carolina, Colorado and Wisconsin. The solicitation from the politicians will be there, the question is — will young people show up? I’m optimistic they will, considering our generation has the most at stake in this election.