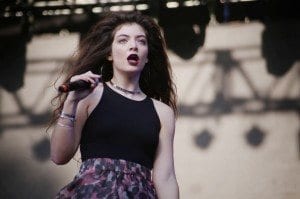 New Zealand-bred singer-songwriter Lorde celebrated her 18th birthday on Nov. 6 and surprised fans by releasing the official music video for the first single, “Yellow Flicker Beat” from the Hunger Games: Mockingjay Pt. 1 soundtrack that she curated.

Lorde first released the track back in September on Tumblr where she noted, “It’s my first offering from what I hope will be a soundtrack you love. It’s my attempt at getting inside her head, Katniss’. I hope you like it.”

Though the track is completely unrelated to the Hunger Games, the video directed by Emily Kai Bock features the songstress all over the place. She is first seen singing in a variety of haunting locations ranging from a motel room to an empty road and later beside a swimming pool and at a glam party where she takes a fall from a superficial cliff.

“Yellow Flicker Beat” is one of four of the songstress’ features on the movie soundtrack that will also feature collaborations from Charli XCX and Simon Le Bon, The Chemicals brothers and Miguel in addition to other features from Kanye West and more.

Check out the official music video for the haunting track here.