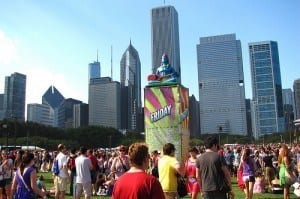 Lollapalooza fans are going crazy across social media as word of a “cheap ticket sale” is spreading across the internet.

According to ChicagoMag, Lollapalooza will release a few discounted “souvenir” tickets the week before early bird admission passes are made available to the public. Regular admission tickets go on sale March 26th.

Through the “cheap ticket sale” a three-day admission ticket to the concert event is $75, well less than the early bird rate of $200 and the regular admission price of $235, according to ChicagoMag.

The Lollapalooza planning committee released an email Monday that the super secret souvenir sale is happening “sometime this week.”  Without any warning about exactly when the tickets will go on sale, but only a vague indication about the start of the sale, fans have been going bat-shit crazy over the early release.

Just check out some of these recent Twitter posts.  “I woke myself up at 9 a.m., so I could go put money in my bank account for the @lollapalooza secret sale tickets & I’m still in bed,” wrote Nicki Sea.

Wesley Ciasson wrote, in all caps, “I will get a Lolla secret sale ticket if it’s the last thing I do!”  Catherine Clark wrote, as many of us students feel, “It’s hard to focus on studying for midterms when the @lollapalooza secret sale is this week.”

And even though the official announcement is a month away, WGN, a local Chicago television station, is already reporting some big names for this year’s Lollapalooza.  This year’s Grammy winners, Mumford and Sons, will be among the headliners.

WGN is reporting that other headliners include Phoenix, Vampire Weekend and the Killers. The National and the Postal Service will also be featured.

The festival is August 2-4 in Grant Park.  Good luck getting those cheap tickets, folks.