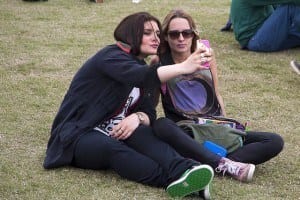 The hashtag generation has ruined the live concert experience

Day 1- Eminem and the Rihanna Surprise

Ah, Lollapalooza, the only place where the president’s daughter can be in plain site, walking around with the rest of us non-presidential patrons, and no one notices nor gives a shit. Chicago’s three-day mega-party was bestowed upon us this past weekend and remained largely incident free, despite the accusations of security-abuse from Day 1 performer Blood Orange. The three day weekend was filled with the typical scenes of a music festival- obnoxious teens, dehydration and flower crowns. The lineup was one for the millennials with headliners Eminem and Outkast being the two main attractions for the weekend. Although Day 1 promised large amounts of rain, it only rained for about an hour and cleared up for some truly optimal weather.

Eminem led the pack with a backdrop in the shape of a giant stereo and him dressed as if he just walked straight out of the 8 Mile set, complete with him being zipped up into a hoodie and spitting verses from his hits, bringing us all back to our angsty middle-school memories. Halfway through his set, I turned around for a second only to hear “OH MY GOD, RIHANNA!” Upon seeing her surprisingly flawless and fresh face on the jumbotron (most celebrities look really old and worn out in person), I admit I fan-girled, screaming with the rest of the crowd, as she broke into her featured hits, “Love the Way you Lie”, “Monster” and singing the chorus to Eminem’s most sing-a-long friendly hit “Stan.”

Before I knew it, I was back in Grant Park for Day 2. Unlike Day 1, I was able to arrive early and was able to take in more scenes than the previous day. The day started off well enough with people heading to The Grove stage to see Under the Influence Tour participant and Atlanta rapper, Rich Homie Quan. Last year, The Grove was turned all the way up full throttle with a high-energy set from 2 Chainz, so I was really interested to see how Rich Homie Quan would fair with his high-energy trap hits. It didn’t really go so well. Quan’s DJ, DJ Fresh kept the crowd excited by playing the resident turn-up tracks, such as “Drunk in Love”, “She Twerkin’” and other twerk anthems. The crowd was okay with this until they realized that it had been 20 minutes since RHQ’s set was supposed to start and then started screaming “We Want Quan.” This chant was immediately regretted when Quan came out and gave the most low-energy set that I have seen in a while. The crowd immediately started to thin, not even waiting for him to break out into his most famous hit “Some Type of Way.”

Foster the People powered through a slew of their hits at the Samsung Galaxy Stage. I sat on the sidelines for this one and saw the crowd was really amped which actually gave me a little hope. The massive crowd swayed from side to side in unison as Mark Foster’s high octave vocals rang throughout the stage.

As the day wore on, I realized the true essence of live music is dead. This is no way in reflection of the performers, who were utterly amazing and pulled out all of the stops for Day 2. Now posing for pictures every once in a while is nothing new, as people want to have a few memories to have as keepsakes to remember their festival experience. However, what people were doing at Lollapalooza was stomach churning, obnoxious and so completely self-absorbed that I almost wanted to chuck my own cell-phone into Lake Michigan. They might as well just rename is “Selfiepalooza” sense everyone was more interested in snapchatting and taking stupid duck faces pictures instead of enjoying live music. Arguably one of the greatest and most innovative hip-hop group’s Outkast hit the stage for honestly the best show I have ever seen in my life. Taking on the stamina and energy of artists half of their age, they put on a hype and interactive set that even the touring queen, Beyonce could take note of. There was so much to take in that moment. From Andre 3000’s powerful jumpsuit that read, “Across cultures dark people suffer the most, why?” to witnessing a reunion of epic proportions. However, much like the rest of the weekend, people were more interested in holding their phones up, getting in the way of the few people who are enjoying the music, to capture 30 seconds of shaky video that most likely won’t even make their way to YouTube. Snapchats, Facebook updates, selfies, tweeting and texting was happening all around me and had been happening the entire weekend. Jack White’s disdain for cell phones at his concerts became utterly clear. The reason festivals were truly festivals back in the days of Woodstock and even early Lolla was because smartphones and tablets were non-existent. People weren’t sucked into the self-absorbed world of social media and music was the only thing that truly mattered. I just couldn’t believe people paid nearly 100-300$ a ticket, (more if you got them from StubHub) and wasted their time and money, staring at the concert through a phone while attempting to record it for pointless reasons or took selfies.  At this point, the only way to truly gain back the original demeanor and appreciation for live music is to ban cell phones at concerts all together, unless you are a credentialed member of the media.

Lollapalooza on Sunday was truly an amazing event despite the heavy rain that would start sporadically. From the bumpin’ beats of Flosstradamus at the Perry’s stage to the intense lasers at the Skrillex show, the afternoon was simply mind-blowing and will definitely not be forgotten any time soon. Perry’s was a complete dance party all afternoon, as per usual, and with it having rained not long before Flosstradamus came on, there was a huge mud pit by the time they took the stage. Even if you managed to avoid the pit, you were still very likely to have been splashed by the many people who were slipping and sliding around in it. Childish Gambino also rocked the crowd pretty hard, coming on stage in an open shirt and blue cargo shorts. He played songs from his most recent album “Because the Internet” as well as some of his older ones. I also made my way to see Ethan Kath at the Palladia stage. The Crystal Castles producer played various mash-ups of their songs, which kept the crowd pretty entertained. There was lots of dancing and energy everywhere you looked. When Skrillex came on to headline, everything and everyone turned up even more. Different colored lasers shot out over the crowd in an appalling fashion as the artist began his set. Though I am not a fan of Skrillex, I was definitely impressed by the show he put on. Aside from the music, the food being served at Lollapalooza was also amazing. Many patrons were bragging about how good the Lobster Corndog was as well as the ice cream cones that were perfect for the late-day drunk munchies.