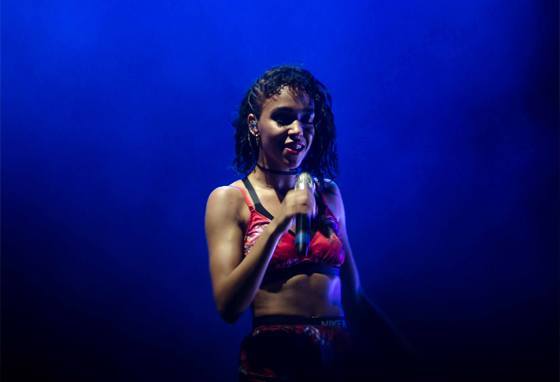 Lollapalooza 2015 concluded on Sunday and we gathered the standout moments

It’s that time of year again, where we give out our #Lolla awards! For 3 days downtown Chicago becomes a mecca for music lovers and festies alike. College News was in the building and we managed to gather a few highlights of the weekend. This year’s categories range from ‘Hunkiest Act’ to ‘Best WTF Moment’. Take a look at the recipients of the 2015 awards.

It’s not only G-Eazy’s lyrical ability that has gained him a loyal following, but his sexy bad-boy greaser look has gained the attention of plenty of ladies, who made their screams heard loud and clear during his headlining set at the Pepsi stage on Saturday. One super parched Lolla attendee even threw their bra on stage to get G-Eazy’s attention. He promptly hung it up on his mic stand through the remainder of his set.

Tove Lo surprised everyone at Alesso’s set when she came out in a gold leotard with matching gold wings. The Swedish songstress belted out her collaboration “Heroes” and looked like an expensive angel that was sponsored by Versace while doing it.

Having heard that Travi$ Scott shows were probably the most punk performances since Sid Vicious used to cut himself onstage, I was prepared for a really turnt performance. Seems everyone else thought so too, with his early 2 p.m. Saturday set being absolutely packed to the brim. However, I wasn’t expecting a full on riot, which Travi$ started after he urged fans to jump the barricade and defy security. Even though this was the shortest set of the weekend, with Travi$ only managing to get out 2 songs, but it was also the most energetic performance I have ever seen in my entire life.

This one is obvious choice if you know anything about The Weeknd’s music. He captivated the crowd with this intimate bedroom songs, but as he sang out to millions about his oral sex preferences, I couldn’t help but think about how awkward it was that there were probably a lot of tweens singing a long.

This award is a tie between SZA and Lion Babe. Both stunning vocalists sported massive manes that cascaded through the wind during their performances. While Lion Babe’s set was more upbeat than SZA’s sultry croon, both ladies showed out with their amazing locks. SZA went for a gorgeous auburn color, while Lion Babe’s massive mane was a honey blonde. I’d kill to know both of these ladies hair regiment.

The super popular pooch, Manny the Frenchie basically had C3 access at Lollapalooza and was backstage for Dillon Francis’ set. Yes, a dog has more pull than you. You can cry now.

Where The Weeknd was sexually explicit, FKA Twigs was sensual and sexy. The Londoner vogues and belly-danced her way through an awesome set that started off with the mind-warping preface and slinked it’s way through her LP1 hits. Complete with a silk crop, matching boxer shorts and a sheer shawl, Twigs definitely had a set that was worthy of some baby-making.

Best Set to Twerk To

Arguably the biggest producer of 2015, DJ Mustard has been responsible for many gyrating booties this year. This was obvious during his 4:30 p.m. Perry’s set on Friday when people were working up a set bouncing their behinds up and down. One thing about twerking is that it helps you lose a lot of calories!

We conclude with giving Lollapalooza an award for the safest and most organized evacuations. Evacuations can be terrifying because it means there is a danger coming that you need to get shelter from, but it is also terrifying because you are ushering hundreds of thousands of most-likely drunk people into the streets of Chicago in an orderly fashion. In most cities this a disaster waiting to happen, but on the last day of Lolla everyone managed to exit and return a little more than an hour later back into Grant park to finish off the day.

[easy-social-share buttons="facebook,twitter,google,linkedin,stumbleupon,pinterest" counters=0 hide_names="force" fixedwidth="yes" fixedwidth_px="111"]
Previous ArticlePDP AG7 Review: The Headset of the futureNext ArticleOn the Up and Up: A Profile on Free Spirited