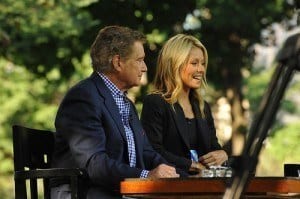 A co-host for Kelly Ripa will be revealed on “Live with Kelly!” September 4.

“Live with Kelly!” will no longer just be Kelly Ripa, and whoever signed up this week. Ripa will announce her new co-host live on Sept. 4.

After many guest co-hosts, ABC has finally chosen who will join Kelly Ripa on their morning talk show. The seat next to Ripa has been vacant since Regis Philbin’s departure in November 2010.

That chair has been kept warm, however, by a long list of guest hosts, 59 to be exact according to ABC. That list includes celebrities like Kim Kardashian, and more frequently Nick Lachey, Anderson Cooper, Seth Meyers, and Josh Groban, according to SeattlePi.com

“Live with Kelly!” will be kicking off a brand-new season Sept. 3, which will be the only time Kelly Ripa has hosted the show alone. She shouldn’t get used to it, because the following day, she will be joined by her permanent co-host and episode guests Claire Danes and American Idol winner Phillip Phillips.

Although the new host of “Live with Kelly!” remains an ABC secret, rumors of who that will be are floating around. “Saturday Night Live” head writer Seth Meyers, who hosts “Weekend Update” on the NBC show, was rumored to be taking Philbin’s spot. Meyers denies the rumor, according to The Washington Post.