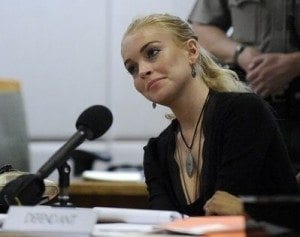 Lindsay Lohan is making the news. Again. The 26-year old starlet was arrested in New York early Wednesday morning after striking a pedestrian with her SUV and then leaving the scene.

Lohan was driving her 2010 Porsche SUV down an alleyway on Manhattan’s west side as she was heading to the Dream Hotel when she struck a pedestrian at a low speed. A NYPD spokesperson said that Lohan then went into the hotel located on West 16th Street and was apprehended by police when she left the hotel at approximately 2:30 am.

Lohan was taken to the police station, booked, issued a desk appearance and released without bail. She was charged with “leaving the scene of an accident and causing physical injury.” Alcohol was not involved.

The 34-year old pedestrian who Lohan hit, was taken to Bellevue Hospital with a knee injury. The victim was in stable condition as the car was not traveling at high speeds.

This appears to be the latest in the downward spiral of neglige for the young actress. Lohan was released from formal probation in March of this year after she was charged with drunk driving and cocaine possession in 2007. Lohan remains on informal probation until 2014 for jewelry theft in 2011.