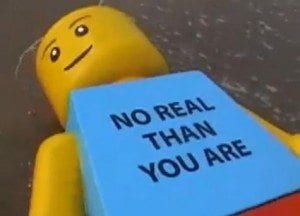 A Lego man washed ashore in Florida on Tuesday morning. But what was thought to be a viral marketing stunt by Lego has become a mysterious occurrence.

The Washington Post reports that the Lego man was discovered by Jeff Hindman on Tuesday morning when he found it on Siesta Key Beach. It was originally believed to be a viral marketing stunt by Lego, but the claim has been denied by the company.

It is believe that the giant Lego man is the work of artist Ego Leonard. The Lego man and Leonard’s site both bear the phrase “NO REAL THAN YOU ARE.” Leonard is also speaking in character, answering press inquiries with “I am glad I crossed over. Although it was a hell of a [swim]. Nice weather here and friendly people. I think I am gonna stay here for a while.”

Reportedly, the Lego man is in protective custody at the local sheriff’s department. If he is not claimed within 90 days, Hindman will get to keep him. “I’ll put it on eBay,” he said.

You can watch footage of the various Lego man sightings below.