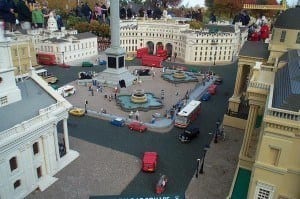 The software, charged with burglary for his Lego barcode scam, lives in a gated multi-million dollar home in San Carlos, C.A. While he is not the first scammer to take to the Lego black market, it is baffling to prosecutors why such a wealthy and high-ranking executive would head down a road of barcode scamming.

Lagenbach was arrested May 8 outside a Mountain View Target store. Police say he had been repeatedly captured on store surveillance with expensive Lego sets in his cart at different Target stores.

Lagenbach completed his Lego barcode scams by printing out sophisticated reproductions of barcodes used by Target stores for lower-end Lego sets. He took the barcodes to stores, slapped them on expensive Lego sets in place of the original barcodes, and purchased the high-end sets for greatly reduced prices. One notable purchase was a $250 Lego Millennium Falcon set for a mere $50.

Lagenbach then turned around and sold the Lego sets through his eBay store TomsBrickyard. The store has since been removed from eBay, but while it was up and running, users rated the stores as “excellent.”

Prosecutors have said that Lagenbach sold 2,100 Lego items for roughly $30,000 over the past year in his Lego barcode scam. Authorities say that on the day of Lagenbach’s arrest, he had placed three counterfeit barcodes on Lego sets, bought one and placed the other two back on the shelves. Perhaps in a Robin Hood moment?

He allegedly had 32 more phony barcodes in his car.

Lagenbach told police that he had seen how to perform the scam on YouTube and was curious to see if it would work. Cops didn’t believe that story, and a search of his home produced photos of dozens of neatly organized barcodes and stacks of brand new Lego sets.

“It certainly looks like an ongoing enterprise … to think we caught him the only five times he did this is very hard to believe,” supervising deputy District Attorney Cindy Hendrickson, of Santa Clara County, said.

Mountain View police spokeswoman Liz Wylie told NBC, “This probably happens more often than you’d think, but this is the first time we’ve ever had a case like this.”

Lagenbach was arrested on four felony counts of burglary with bond set at $10,000. He is free after posting bail—he’s wealthy enough to dish out 10 grand, remember— and is awaiting trial for his burglary charges.