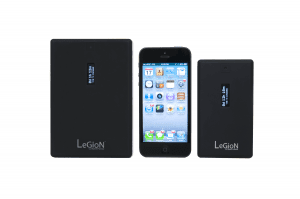 Legion is a portable energy source with a built-in Organic LED display coupled with a microprocessor. It can charge any USB powered electronic device. Unlike a traditional portable battery where you’re left in the dark about the state of charge of your battery, Legion learns how you use your electronic devices and displays precisely how much more time (day:hours:minutes) you have remaining until you run out of power. Legion uses premium grade Lithium Polymer batteries designed to maximize your energy density while packing it into the smallest area possible. Legion is proudly designed in Silicon Valley, California.

Legion employs several advances in electronics. The use of an Organic LED display offers several advantages over that of a traditional back lit LCD display. OLED’s are thinner, have a 180 degree viewing angle, 10,000:1 contrast ratio, and OLEDs only consume power when an actual pixel is lit.

Legion’s microprocessor (CPU) is used to control the OLED display, implement the smart battery metering detection/algorithms, and interface with on-board sensors. It utilizes the world’s lowest sleep and standby power which draw just nanoamps. This allows for Legion to consume almost no power when it is not in use and delivers crystal clear animations at high refresh rates. The CPU acts as the gate keeper between any flow of current in and out of the battery. It samples the flow of electrons at roughly 100 times/second. This makes Legion’s battery metering calculations extremely accurate.

The USB 5V output uses a DC/DC (Boost) circuit. It is used to convert the lithium polymer battery’s voltage from 3.0V-4.2V to a stable 5.0V output. In low cost products, this voltage conversion is done very poorly where the efficiency of conversion is measured to be roughly 80%. Legion uses high grade components delivering up to 97% efficiency. This means that you’ll be able to utilize more of your battery’s stored energy than other batteries on the market today. A 17% difference in energy conversion efficiency means that for a 11,000mAh battery, 1870mAh is simply going to waste in the form of heat.

Not all USB power sources are the same. USB wall outlets, desktops, laptops, and solar panels all charge your phone at different rates. With Legion, you’ll be able to identify which power plug is capable of delivering the most power by simply toggling to the Watts and Amps menus. The Watts and Amps menus will display your precise charge power and current in numeric form on the Organic LED display. This allows you to identify which USB power source is optimal for charging Legion or any of your electronic devices as quickly as possible.

Charging is done with the provided micro USB retractable cable. Just plug the micro USB cable into legion and the other end to any USB power source:

Pre-Order yours today @ www.plxdevices.com and save $10 by using PLXCN14 coupon code during checkout.