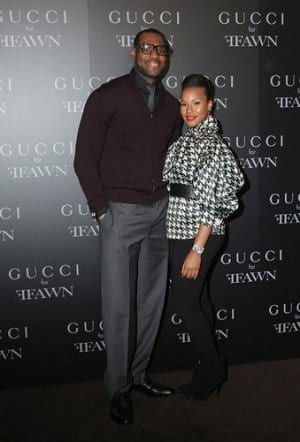 Basketball all-star, LeBron James has married his high school sweetheart, Savannah Brinson, this weekend at an ultra-private ceremony at the Grand Del Mar Resort in San Diego, CA. James has accomplished a feat that many cannot, marry their long time high school girlfriend. Almost out of a teen novel, Brinson has remained through James’ Entire career thus far, following his success in the NBA including massive attention for his MVP status and NBA Championship rings. James’, 28, proposed to Brinson, 27, on January 1, 2012 and have kept most plans private from the media fodder. This weekend they celebrated with 3-day wedding festivities, all which were kept under wraps including the guest list.

The super exclusive wedding plans have been noted as super secretive, informing guests of rules surrounding the wedding ceremony. Unlike many celebrity weddings that have flooded media outlets, it has been reported that the couple requested no cell phone use, equipped with heavy security on the grounds. Guests were even escorted to the resort with an umbrella to prevent looming helicopters from exposing guests. Sources have also reported approximately 200 in attendance, which included Beyonce, Jay-Z, Dwayne Wade, Gabrielle Union, and singer Ne-Yo.

Little has been said about the wedding, citing James’ as only being “excited and nervous” about the upcoming celebration. He had also revealed briefly that he wanted to give Savannah the dream wedding she always wanted.

After nearly ten years, it is clear they are a strong couple unscathed by the pressures of LeBron’s career. The couple also have two sons together, LeBron Jr., 8, and Bryce, 5.  Brinson became pregnant her senior year of high school as LeBron began his astounding career. Cue the “Aww.”

As of late, the only photos posted have been of guest’s dawning their beautiful wedding outfits such as Gabrielle Union’s red sleek form fitting dress with black leather platform heels posted on her Instagram account.  New details are still being released as we await the official wedding pictures of the long awaited, James/Brinson wedding.