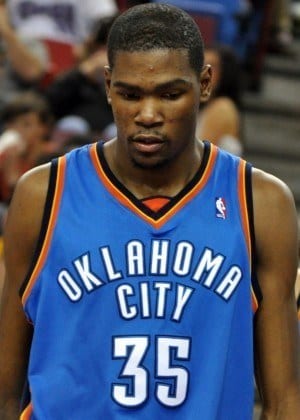 The two NBA All-Stars may be teammates for Team USA

LeBron James and Kevin Durant may have been battling against each other in the NBA Championship last night, but they are soon to be fighting together on Team USA for the gold medal in the London Olympics.

After LeBron James is finished popping champagne bottles and Kevin Durant wipes the tears from his eyes, the two are scheduled to meet in Las Vegas on July 5 for the start of Team USA basketball practice. According to U.S. national team assistant coach Mike D’Antoni, it is possible that both James and Durant could be in the starting lineup together come the Summer Games.

“Their games complement each other so well,” D’Antoni tells USA TODAY Sports. “Lebron is a great passer and a creator and Kevin may be the best shooter we have in the game.”

Although U.S. head coach Mike Kizyzewski has confidence in LeBron James and Kevin Durant playing well together, he stated that there are many different combinations he can go with for the team, and everything can change between now and the London Games.

LeBron James and Kevin Durant are not the only two from the 2012 NBA Championship that are in the group for Team USA. Alongside James are fellow Heat players, Dwyane Wade and Chris Bosh. Also, with Kevin Durant will be the Thunder’s Russell Westbrook.

NCAA champion, MVP and the pride of the Kentucky Wildcats, Anthony Davis, is also being considered for Team USA. Davis is the presumptive top overall pick in the NBA draft Thursday to the New Orleans Hornets.

The final twelve-man roster of Team USA is expected to be announces July 7.