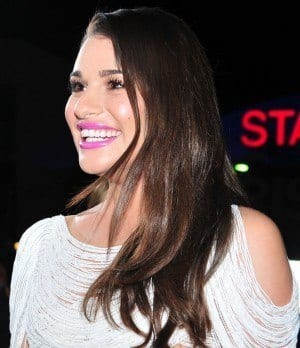 Lea Michele will play a single mother in the upcoming season of SOA.

Glee star, Lea Michele will be switching gears as she takes on a dramatically different role in the upcoming season of Sons of Anarchy.

Michele will be a guest star on the series playing Gertie, a single mother who works as a truck stop waitress and manages to connect with Gemma.

She will be joining other star guests on the series including Courtney Love and Marilyn Manson.

Michele express her excitement about her new role via Twitter: “I’ll be appearing on an episode of my favorite show @SonsofAnarchy! Thank you so much @Harperbar & @sutterink #SOAFX.”

SOA fans are skeptical about how Michele will handle her role on the tough series that is a dramatic shift from her well-known role on the musical, Glee.

Despite the skepticism, Michele and creator Kurt Sutter are extremely excited about her role on the upcoming season.

“I like to do some casting that’s a little bit outside the box,” Sutter told the press during a Television Critics Association panel. “You know, from Stephen King to David Hasselhoff – we try to do stuff that’s fun.”

Michele’s episode is slated to air on October 14th on FX.