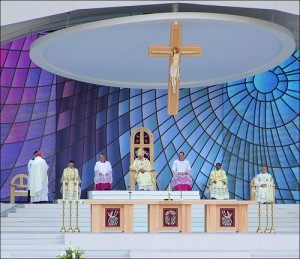 Last Pope Theory dictates that the recently resigned Pope Benedict XVI is to be the last legitimate pontificate of the Catholic Church, and will be succeeded by an image of Satan.  Penned by Saint Malachy, the first Irish saint, in the 12th century, Last Pope Theory is a series of 112 mysterious Latin phrases that correspond with attributes of each pope (and anti-pope) until today.  According to Last Pope Theory, Pope Benedict XVI is the second-to-last pope, and next we shall see the advent of someone called “Peter the Roman” whose reign will end in the destruction of Rome.  And all these prophecies do coordinate with the Mayan calendar…Get your underground bunkers and canned food pantries stocked, folks.

“In the extreme persecution of the Holy Roman Church, there will sit [i.e., as bishop].
Peter the Roman, who will pasture his sheep in many tribulations:
and when these things are finished, the city of seven hills will be destroyed,
and the terrible judge will judge his people.
The End.”

Connections between existing popes and Last Pope Theory have been made regarding the birthplace, timing of life events and coat-of-arms of past popes.  Most recently, Pope Benedict XVI, prophesied as “Glory of the Olive” was a member of the Benedictine Order, whose crest contains Olive Branches, and who was intent on “extending the olive branch” to promote peace.

As is common practice with most conspiracy theories, scholars have done their best to debunk the legitimacy of Last Pope Theory and confirm the ancient writings as either forgery or first-class quack material.  While most critics agree that earlier popes seem to fit their categories perfectly up until Pope Urban VII, succeeding popes seem to require quite a stretch to fit the mold.  If you’re getting shivers, or universal nudges to pack up and prepare, keep an eye on the next papal election due to take place this Spring.