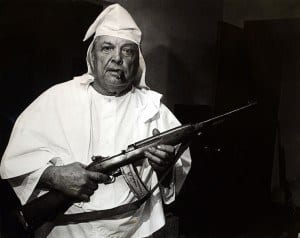 Georgia chapter wants to clean up a roadway

The Klan highway could very soon become a reality. A Georgia-based chapter of the Ku Klux Klan wants to adopt a stretch of road. The KKK’s application is making transportation officials leery though.

The intended Klan highway is a small portion of route 515 in the Appalachian Mountains.

“All we want to do is adopt a highway. We’re not doing it for publicity. We’re doing it to keep the mountains beautiful. People throwing trash out on the side of the road … that ain’t right, stated April Chambers, chapter secretary”

In 1997, a chapter of the Ku Klux Klan petitioned to adopt part of a highway in Missouri. Their initial application was denied, but the Klan took the case to court, eventually winning out. However, the U.S. Supreme Court refused to hear that case. The federal appeals court that did handle the case said that denying the group to adopt and asking for its membership requirements to be changed would encroach on their First Amendment rights.

“We’re not racists… We just want to be with white people. If that’s a crime, then I don’t know. It’s all right to be black and Latino and proud, but you can’t be white and proud. I don’t understand it. I don’t see why we can’t (adopt the stretch of highway),” Chambers added. “Would it be any different if it was the Black Panthers or something? Someone always has some kind of race card.”

Georgia State Representative Tyrone Brooks stated that if the Klan highway receives a green light, then the state should simply consider ending the program entirely.

Harley Hanson, known as the Exalted Cyclops of the Union County Klan, stated that the group only wants to help the community by creating the Klan highway.

“Our intentions are to keep the road clean,” Hanson told Reuters. “We love our race. We don’t promote violence.”

Do you think the KKK should be allowed to adopt part of the road?