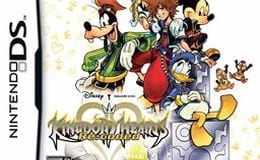 The popular Disney/Final Fantasy crossover gets the review treatment

Since the inspired marriage of iconic Disney characters and “Final Fantasy” heroes in 2002’s “Kingdom Hearts,” a total of nine games have been released in the Action/RPG series across consoles, portables and mobile phones. The looming question is whether or not “Kingdom Hearts Re:coded” has enough twists to make this latest DS installment compelling for series veterans and a blast for gamers new to “Kingdom Hearts.”

Here’s the simple version: King Mickey and the gang get themselves Tron-ified and it’s up to a digital version of Sora to squash the bugs and prevent a trio of Disney villains from blotting out the world with a horde of Heartless. The thin storytelling and infrequent cut scenes won’t win any awards, but Re:coded does serve up a refreshingly upbeat tone compared to previous Kingdom Hearts entries – even with Cloud Strife appearing briefly to inject a touch of emo to the proceedings.

On paper, Re:coded’s gameplay should be a disaster. Here is a Nintendo DS game drawing its substance from a puzzle-centric mobile phone game while implementing the Command Deck system for real-time combat of “Birth by Sleep” (PSP) . Not only does it work, but combat is a joy. In the latter half of the game, Sora starts flexing his ever-increasing range of magic and melee attacks while fighting off a challenging stable of Heartless and Disney villains. The battles do get a bit long in the tooth during the Floor Challenges (where Sora enters mini-levels reminiscent of Matrix code in order to reveal hidden doors), but overall the combat is excellent, even with the DS’s somewhat imprecise controls.

The compliment to satisfying combat is a robust RPG element, and it’s here that Re:coded gets a burst of originality. Rather than watching passively as your character gains new abilities with experience, Sora’s fate is put directly in your hands with the Stat Matrix. Think of this as a motherboard with branching circuitry, multiple CPUs, sockets and ways to “overclock” your gameplay. Using some clever wordplay inspired by the games’ techie focus, this circuit board lets you place stat chips (earned in combat and available for purchase) in 100s of slots, directly controlling your growth during your 13-15 hour journey. Along the way you’ll unlock Dual Processing (doubling your existing stats), accessory expansions and even “cheat tuners” which give you direct control of loot drops, provided you’re willing to sacrifice a few things like hit points along the way. It’s creative but not cumbersome. Players will grasp its nuances quickly without succumbing to stat management hell.

Veteran “Kingdom Hearts” fans will appreciate the new ideas, because the actual worlds they’re traversing are ripped from 2002’s debut “Kingdom Hearts release.” They will have already seen Wonderland, Agrabah, Traverse Town, Hollow Bastion and Olympus Coliseum. What saves Re:coded are several gameplay twists. For example, the entirety of Olympus Coliseum comprises surprisingly solid turn-based combat. The final stages of Wonderland find Sora hurtling Space-Harrier style toward Heartless and the gangly boss. Traverse Town concludes with some tense side-scrolling platform levels.  You’ll even dabble in squad-based combat when Sora’s Keyblade is destroyed and Donald and Goofy come to your aid in battle. These constant twists on standard “Kingdom Hearts” gameplay are executed well and keep the entire experience feeling fresh despite the recycled worlds.

The only serious knock against Re:coded is the misbehaving camera, which thankfully isn’t a persistent problem. The final stage of the Jafar boss fight, however, combines twitch combat with very cramped platforming resulting in more than a few blind jumps and subsequent deaths.

THE BOTTOM LINE:
“Kingdom Hearts Re:coded” will delight fans new to the series, even if it isn’t the ideal entry point in the series’ canon. Longtime devotees to this Disney “Final Fantasy” universe should appreciate the variety in gameplay and the subtle hints at what could be in store for “Kingdom Hearts III” — although we’d love to see the formula turned on its head, with Disney characters entering the “Final Fantasy” universe. Even as the lifecycle of the DS comes to a close and the “Kingdom Hearts” series risks over-saturation, Re:coded is still an adventure worth buying.