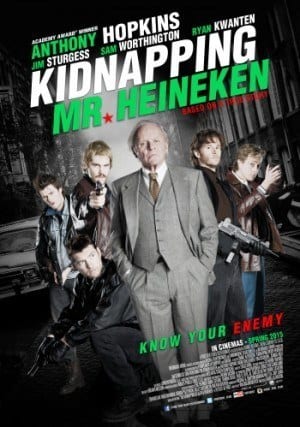 Kidnapping Mr. Heineken advertises itself as a cinematic retelling of the 1983 kidnapping-and-ransoming of a rich beer tycoon from the perspectives of the criminals. However, it ultimately dissolves into a long snooze-fest as the brothers in crime wait for the money to pour in from the police.

In 1983, a group of childhood buddies join their minds together in a brainstorming sesh and then kidnap Mr. Heineken, the heir of the Heineken brewing company and also one of the richest men in the world at the time. A ransom is demanded from the police, and in the meantime, they feed Mr. Heineken and his frightened chauffeur, who they also kidnapped and shoved into the back of the van. We follow the young men from their plotting, their execution of the crime, and then to their fall.

On IMDB, Kidnapping Mr. Heineken is classified as an action / crime / drama / thriller. When I saw the movie, I was disappointed. Movies should describe their genre elements the way food labels do: by order of the largest quantity to the least. Here’s my un-scientific breakdown of Kidnapping Mr. Heineken’s genre ratios:

Why 95%? A large part of the movie was centered around the drama between the brothers in crime. Cor van Hout, with a pregnant girlfriend, has the most to gain (and lose) out of the group. A few attempts to humanize the criminals were made. While I occasionally felt pity for the criminals, I found none of their life stories all that compelling or likable.
Anthony Hopkins dominates the screen during his short and brief appearances as the calm and calculating Freddy Heineken. His place in the script is quirky and quite intriguing. Hopkins definitely has the gravitas to carry this movies, but although the entire movie is centered around his character, we barely get to see him except when the criminals feed him in his cell.

The young men may have planned the heist and they do curse like pirates, but they’re decent folks at heart when it comes to the value of life. Even purportedly tough-guy Willem wusses out when he’s faced with killing Heineken. No explorations of the dark potential of the human spirit here.

Most of the guns are for waving and threatening, not so much killing. The actual kidnapping of Freddy Heineken happens in a flash, and then it’s over. What action?

All that bickering filled the movie like cotton. Lots of frill, no thrill.

Anthony Hopkins dominates the screen during his short and brief appearances as the calm and calculating Freddy Heineken. His place in the script is quirky and quite intriguing. Hopkins definitely has the gravitas to carry this movies, but although the entire movie is centered around his character, we barely get to see him except during very select parts.

The actors who played the criminals were good, but not show stars. It also didn’t help that the script didn’t allow their characters to evolve much beyond bickering and soap opera-style drama.

At times, there was little to distinguish the young criminals from each other besides the fact that one of them was expecting a baby. The younger actors who played the criminals are:

Jim Sturgess has shown up in Cloud Atlas and Across the Universe. Jim Sturgess’s performance as Cor Van Hout is good but there wasn’t much for him to work with.

The lead from Avatar and Clash of the Titans, Sam Worthington returns to the large screen as the scruffy Willem Holleeder. I wasn’t too impressed with his acting chops in Avatar or Clash of the Titans, but his work here is an improvement even though he sounds way too British for the Dutch character that he’s supposed to be.

The quick and constant bickering between the buddies seems to channel the style of British crime movies such as Lock, Stock and Two Smoking Barrels (1998). The British accents that pervaded throughout this film were distracting from its supposedly Dutch setting.

I give Kidnapping Mr. Heineken a 5/10 due to the good cast, amusing moments with Mr. Heineken in his cell, and great concept but poor execution. At times, it felt like the actors’ talents went to waste due to poor character development and a lifeless pacing encumbered with pointless bickering.