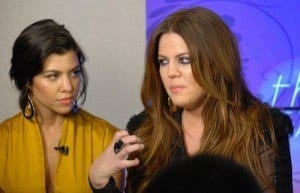 Khloe Kardashian fans are aware of her and husband Lamar Odom’s hopes for a little bundle of joy.  But the second season of “Khloe & Lamar” gives us more insight into how their struggle to start a family has affected their relationship, says the Huffington Post.

Khloe used Twitter to respond to rumors she had been undergoing fertility treatments, claiming, “If and when I do, I will shout it from the rooftops, but for now it’s in God’s hands.”

Even if the couple is leaving it up to God for now, their longing for a child has become part of their everyday lives.  After the season finale of “Kim & Kourtney Take New York”, an extended preview of “Khloe & Lamar” aired.  In the clip, we see Kourtney ask Lamar, “Were you jealous that Kourtney got pregnant again?” and Lamar responds, “Yes, they get to have another baby and I don’t.”

Ouch!  Those words had to be hard for Khloe to hear, but she seems to be keeping a positive attitude.  She recently used her blog to post a trailer for their show and tell fans that she remains optimistic, sharing, “no matter what, at the end of the day, Lam and I have each other and that’s all that matters :)”.

Khloe and Lamar were married in September of 2009.  Lamar has three children with former girlfriend Liza Morales.