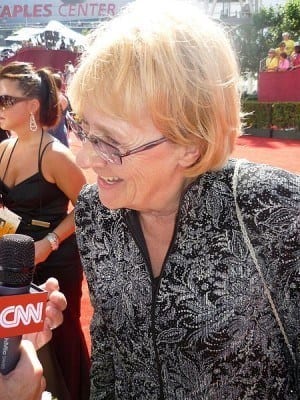 Kathryn  Joosten, best known as the actress playing the cantankerous neighbor on Desperate Houswives, died on Sat., June 2 of lung cancer at the age of 72.

Joosten had beat two previous battles with cancer before her death. She had two different forms of lung cancer, one in 2001 and the other in 2009, that she successfully overcame.

In a piece for The Times in 2011, Kathryn Joosten said she knew she would have to deal with cancer for the remainder of her life, but she did not let it impact the way she lived her day-to-day life.

“So far, I am a cancer survivor, but cancer will be with me for the rest of my life, be it as a nodule, tumor or cell someplace, or in my fears and anxieties. Therefore I’ve decided that I am ‘living with cancer,’ ” she said in the piece about cancer.

Kathryn Joosten was also well known for her role as Mrs. Landingham on The West Wing

She also held a reoccurring role on Dharma and Greg and had guest spots on shows such as Ally McBeal and Scrubs.

Joosten won two Emmys for her time on Desperate Housewives as the watchdog neighbor of Wisteria Lane.

Kathryn Joosten was well-known for not getting her big break until later in her life.

Kathryn Joosten also had many outside of the entertainment industry. She is most notable for her involvement in animal rights, most particularly when she appeared with other celebrities at a 2008 news conference in Los Angeles asking the city to abandon a $40-million elephant enclosure project at the Los Angeles Zoo.

Kathryn Joosten’s family announced in a statement that a private service will be held at her home with a memorial service to follow soon after.