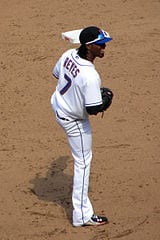 The former Mets short stop is leaving the New York team in a rough year.  They went 77-85 in their third straight losing season.  Also, the attendance at Citi Field was 2.35 million, a seven percent drop from last year.

Mets’ general manager Sandy Alderson said of the deal, “if the numbers are what are speculated and Jose does leave us, I don’t think people will be surprised that under those circumstances he went elsewhere.  It doesn’t mean they’ll be happy about it.”  Reyes is coming off a deal that paid him $32.4 million over five years.

28-year-old Reyes is a four-time All-Star and three-time stolen base champion.  He signed with New York at the age of 16 and become the Mets’ first NL batting champion last year, when he hit .337 and topped the league with 16 triples, while stealing 39 bases.

Reyes’ arrival in Miami most likely means three-time All-Star Hanley Ramirez will be moving from shortstop to third base.