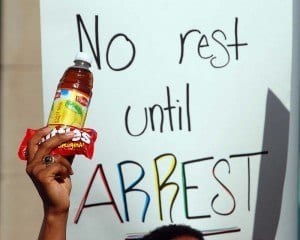 Says Zimmerman was absolutely not racist

Joe Oliver, a former reporter and acquaintance of George Zimmerman, has been defending Zimmerman unconditionally, claiming that the incident had nothing to do with race.

“I’m a black male and all that I know is that George has never given me any reason whatsoever to believe he has anything against people of color,” Joe Oliver said in a telephone interview with Reuters. “All these people who are threatening George, what makes them any better than the person they think he is?” Oliver said.

“He couldn’t stop crying. He’s a caring human being,” Joe Oliver, 53, who has known Zimmerman for several years, said.

“I mean, he took a man’s life and he has no idea what to do about it. He’s extremely remorseful about it,” Oliver said, relating stories told to him by Zimmerman’s mother-in-law, a close friend of Oliver’s wife.

The New Black Panther Party, an African American organization taking its name from the radical group of the 1960s, has placed a $10,000 bounty on Zimmerman. “You’ve got all these people wanting to lynch the man and they don’t know the whole story. There are huge gaps that are being filled in and interpreted without evidence,” said Oliver.

Joe Oliver has spoken out several times in defense of Zimmerman. He told Piers Morgan, “This was not a case of race or profiling. This was a case of a man whose neighborhood had been victimized by numerous crimes, and he saw a suspicious individual, and he did what he thought was the right thing. And again, it turned out horribly wrong.”