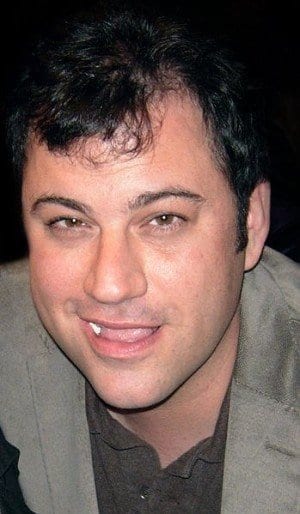 Jimmy Kimmel and President Obama got some laughs at the White House Correspondents’ Dinner on Saturday.

Obama got the first laugh, taking jabs at Hollywood celebrities and even poking fun at himself. The president ended his speech saying that he had more jokes to share, but there was one catch. “I have to get the Secret Service home in time for their new curfew,” he cracked, referring to the agency’s recent prostitution scandal.

The official comedian of the evening, Jimmy Kimmel, spared no one, including the president. “I know you won’t be able to laugh at my jokes about the Secret Service. Please cover your ears, if that’s physically possible.”

“Remember when the country rallied around you in hopes of a better tomorrow? That was hilarious,” Jimmy Kimmel joked as President Obama smiled on.

Referring to the first lady’s fitness push, Jimmy Kimmel joked, “They say diplomacy is a matter of carrot and sticks, and since Michelle Obama got to the White House – so is dinner.”

Not everyone was amused by Jimmy Kimmel, however. Keith Olbermann was not at the dinner, but he was still one of Kimmel’s many targets. “I’d like everyone to look under your seats,” he joked. “Under each one you will find a copy of Keith Olbermann’s resume. Is Keith here tonight? Limo wouldn’t pick him up?”

Olbermann immediately responded via Twitter, “Funny that Jimmy Kimmel ripped me after his people desperately wanted me to fly to LA to be on his show this past Wednesday,” he tweeted Saturday night.

The White House Correspondents’ Association was formed in 1914 as a liaison between the press and the president. Every president since Calvin Coolidge has attended the dinner.

Also known as nerd prom, once a year journalists sit down with those they cover —  the political elite and a smattering of Hollywood’s boldface names.