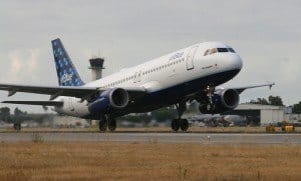 A JetBlue Las Vegas flight was diverted to Amrillo, TX., Tuesday when the pilot reportedly had a mental breakdown. “Say your prayers,” he said to passengers. The co-pilot made the unscheduled landing in Amarillo, and another off-duty pilot, that happened to be on the plane, took over the co-pilot position.

The “ill crewmember” was taken to a hospital in Northwest Texas for an examination. Passengers on the plane took video and tweeted about the event as it happened. “Our pilot went nuts and we had to land in Amarillo. I saw my life flash before my eyes today,” tweeted passenger Tiffany Lee. Another witness told Fox 5 News, “I saw a guy wearing a pilot’s uniform run down the aisle screaming and yelling and banging on the cockpit door to let him in.” The witness said the man was screaming, “Say your prayers! Say your prayers!”

The flight took off from John F. Kennedy International Airport in New York. Upon arriving in Amarillo, police spokeswoman declined to comment but said her department is now assisting the FBI on the investigation.

In the video below, passengers can be seen trying to take pictures and videos of the incident, and a crew member can be heard stating, “Please everybody, we don’t need pictures of this. Just stay seated.” The passengers were called into the airport for a short time but were placed on another plane continuing on to Las Vegas. The pilot is unnamed.