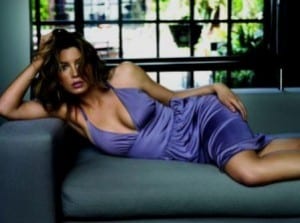 The actress also revealed her fiance, Justin Timberlake, picks out her outfits

Jessica Biel appeared onstage Wednesday with NY Jets quarterback Tim Tebow as the two were the first presenters at the ESPY Awards in Los Angeles. It wasn’t the pairing of the stars that stole the show but Biel’s stunning looks. The star also revealed that her fiancé, Justin Timberlake, often picks out the outfits for her to wear and that she had no choice in the engagement ring she received.

Jessica Biel, 30, looked glamorous in a white mini-dress that consisted of a fitted top and full skirt that showed off her leggy assets. The star remarked that her favorite part of the outfit was her white Mary Jane pumps with yellow neon heels.

“I know the ?#espys? are about sports and stuff but LOOK AT MY SHOES!!!,” Jessica Biel wrote on Twitter.

Biel and Tebow took the stage arm in arm to present the award for Best Breakthrough Athlete. The award was presented to New York Knicks basketball star Jeremy Lin.

Earlier in the day, Jessica Biel admitted via Twitter that she was worried about presenting with the deeply religious Tebow, 24.

“Dear God, please don’t let me swear in front of @timtebow at the ?#espys? tonight when we present. Love, Jess,” wrote Biel.

Jessica Biel also made headlines for revealing to InStyle magazine that her fiancé has better taste than she does when it comes to outfits, and engagement rings, too.

“When I walk out of the closet after getting dressed in the morning, I’ll go like this [turns palms upwards as if to say, ‘Well?’] And he goes like this [shakes his head no]. Then he picks again. It’s hilarious,” the star told the magazine for its August cover story.

Jessica Biel also revealed that she had no choice in the engagement ring she received from fiancé Justin Timberlake. Timberlake, 31, and Biel have been together on and off for four years. Their most recent breakup was confirmed in March 2011 but they were photographed months later at several Los Angeles parties and events. The pair has been engaged since January.

“I had no say whatsoever [in the ring]. I don’t micromanage,” the actress said. “He is fearless in his choices and has a real eye for design. And I’ll be honest: He has better taste than I do.”

Jessica Biel will next appear in the remake of the 1990 Schwarzenegger film, Total Recall. Biel will star opposite Colin Farrell, Kate Beckinsale, John Cho and Ethan Hawke. The film is set to be released on August 3.