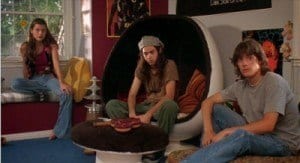 Dazed and Confused actor Jason London defecates and defames himself

Jason London, best known as Mr. Randall “Pink” Floyd from Dazed and Confused got arrested and may have defecated himself in a cop car on Tuesday, according to a police report. The actor was in Scottsdale, AZ at a bar when a fight broke out, leaving him with a pretty accurate bar fight looking mugshot and a brief return from happy anonymity.

In response to both allegations, Jason London himself tweeted, “I would never say or do the crap they are reporting.  Have faith in me. The truth will come out and you will see.” I applaud your word choice Jason London.  Also, is Twitter really the choice method of every celebrity to explain away public brawls?

According to the report, the actor was hammered on Tuesday, and punched someone who got upset after he sneezed on them.  Fists hit harder than snot, any day.  Jason London then proceeded to assault a bouncer, belligerently rage at police and paramedics, drop a homophobic slur, and instruct officers to “look me up” because “I’m rich” and a “famous actor.”  The kicker came when police officers reported that they saw the actor “lean to the left and defecate in his pants.”  The whole incident smacks a bit distasteful and very desperate.  Jason London, famous for acting in the classic coming-of-age type drama that we once loved so has kept in line with the typical has-been script and earning minutes of TMZ fame.

Neither London twins seem to have much luck with publicity these days.  Jason’s twin, Jeremy is a recovering narcotic who let loose a story about getting kidnapped and being forced to do drugs that anyone could see through in a dark room wit