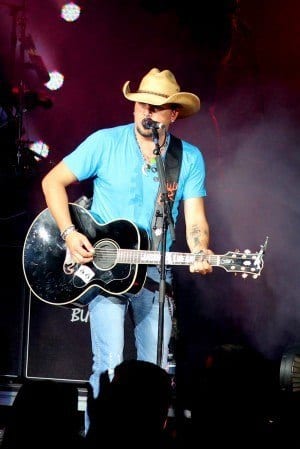 Jason Aldean surprises fans with his seductive single that strays away from his signature hard-rock-infused style.

Country superstar, Jason Aldean is gearing up for his sixth studio album slated to release later this year with the recent release of his lead single, “Burnin’ It Down.”

Produced by Michael Knox and written by Rodney Clawson, Chris Tompkins and Florida Georgia Line’s Brian Kelley and Tyler Hubbard, “Burnin’ It Down”  is a country/R&B slow jam that is sure to make its way onto everyone’s romance playlist.

The song is flirty with its seductive chorus yet simple lyrics and carries a mellow tempo, easily making it a sing along that’s sure to get stuck in your head.

“Burnin’ It Down” is a standout track among Jason Aldean’s previous hard-rock-infused hits like “My Kinda Party” and “Dirt Road Anthem” because of its much slower drum loop and dreamy guitar riffs, something that’s unheard of on Aldean’s previous albums.

According to Aldean, that was intentional.

“I think with every album we’ve tried to push a little bit more and not go in a completely different direction … but not feel like we’re making the same record over and over,” he said. “I think the first single really is that song that sets the tone for everything else. It’s a new album, a new sound and (‘Burnin’ It Down’ says) this is a whole new thing coming out.”

Check out the official lyric video for “Burnin’ It Down” here.