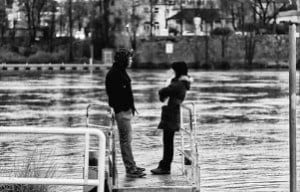 How do you know if it’s a break or a break up?

We all know relationships are complicated. Some days we like our partner while other days we wish they would get as far away from us as possible. But nothing is more terrifying than hearing the words, “We need to talk.”

The two of you sit down and discuss your exhausting relationship. He says things are getting too difficult or she thinks the two of you aren’t right for one another. They haven’t necessarily said the words “it’s over”, but it sure feels that way. So how do you know if this is their way of trying to end things? The next few weeks after “the talk” will determine everything. Here are some signs to look for in order to understand where the two of you are headed.

So you haven’t heard from them in a couple of days post-talk? That’s normal. Most people need their space to think things over before entering the next phase of whatever it is the two of you are doing. If your boyfriend is the one who made the call to take time apart, there’s something you need to understand about men: they scare easily. Most men do not like the idea of being tied down to one woman for the rest of their lives. It makes them feel uneasy and nervous that they may be missing out on something else.

This could just be him trying to figure out whether or not you’re the right woman for him. A lot of men need this time to learn who they are and what they truly want in their life. If he’s the right man for you, he’ll come back. If not, now you know. But you can’t rush this process. Do not suffocate him during this time. His mind needs to think things through without your influence. If you constantly reach out to him, you’re only going to aggravate the situation and push him further away. Plus, this is a good time for you to figure out whether or not he’s right for you. Sometimes when you’re so involved and obsessed with a relationship, you fail to see the flaws or changes you’ve made in your own life. Become aware of the things you may have forgotten about and left behind during time. This could include friendships, hours of sleep, the amount of effort you put in at work or socializing. Do not look at this time apart as a negative thing. More than likely, the space he asked for isn’t necessarily about you. This time is about him and what he really wants in life.

Is she worried that you two won’t work out? Does she believe you’re not fit for each other? Has she called a time-out on the relationship? We’ve learned why a lot of men call for a break, but why do women? To be honest, not many women have the courage to place a relationship on pause. They usually leave it up to the men in fear they’ll lose him entirely if they’re the ones to pump the breaks. Most of the time a woman asks for time apart because she believes something is missing in the relationship. Whether it’d be romance, fun or attention, your girlfriend isn’t happy. This is her time to figure out if being with you is what’s best. Guys, as much as you don’t want to hear it, you’re slacking in the chivalry department. You need to step up your game! Your career shouldn’t consume you, don’t forget about special occasions and for once in your life, be on time to dinner.

Only time will tell if this is the end of your relationship. If it really is a breakup rather than just a break, you must prepare yourself now. Over the coming weeks, learn to be on your own again. Do not under any circumstance go looking for a rebound. If you still love your partner, you won’t do this. If you were in fear of losing them before, rebounding is a sure way you’ll lose them now.

While on this break, try not to over-think things. Take this time to reorganize your priorities, learn who you really are and make a new bucket list. Do not sulk or become depressed. This could be exactly what you need to figure out if this is the right relationship for you as well. You may surprise yourself and realize it’s not going to work out like you had hoped. Then again, this may just be what the two of you needed in order to make things work. Either way, a break isn’t always a bad thing. Instead of viewing it as a loss, think of it as a gain. It’s going to teach you one more valuable lesson in this game called “love”.