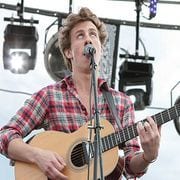 At the Sasquatch Music Festival I briefly interviewed the band GIVERS,whose members proved to be just as eclectic as their music

From Alternative Press to Nylon, after being singed to Glassnote Records everyone is catching on to the infectious afro-pop, indie band GIVERS. On the last day of the Sasquatch Music Festival, I caught up vocalist/guitarist Taylor Guarisco, drummer/vocalist Kirby Campbell and keyboardist Nick Stephan for a quick interview and, since we share the same hometown of Lafayette, Louisiana, it was entertaining to say the least. Their debut album “In Light” was released on June 7th and can be purchased here. Allyce Andrew:  How do you feel like your set went?

Taylor Guarisco: [Nick pretends to be speaking]  Well, the show was awesome. The people … were dancing a lot — more than normal — aaaaaaaand the scenery was beautiful. It was such amazing scenery to look out over the crowd and see this huge gorge yackyakablala blerghyahala.

AA: [laughs]  Who were you excited to see at Sasquatch?

AA:  It’s going to be amazing.

AA:  Where else are you guys going this summer?

TG:  Immediately after this we’re going down the West Coast then after that we’re going to take our first trip overseas to Europe.

AA:  Where are you playing at in Europe?

AA:  So do you like playing at festivals the best?

TG:  I mean, both festivals and venues have their strong points, you know, or like their advantages. Festivals, like, the outside environment is very refreshing and you could say there’s a certain magic to that and then in clubs there’s a certain intimacy, you know. Everything vibrates in a club, the stage shakes and you can hear everything and it’s kind of like a visceral, loud experience where at a  festival all the sound just kind of goes zoooosh [makes an expanding motion outward] and it can be a little different or weird sometimes, festival stages. But, overall, the beautiful — you have to write in: “he opens his arms in a majestic gaping way,” — the atmosphere kind of makes up for that, I think.

AA:  Yeah, I think that this festival has a really great atmosphere and lots of nice people. But you guys are signed to Glassnote now, did they approach you?

KC:  Yeah, they approached us. I think they came and met us at ACL and it kind of felt really good right off the bat with them but we though about it for a few months and wanted to make sure and then it was pretty clear this year that it was them. They just had that same family feeling that we felt that we had between us, and it just felt like a really good connection.

TG:  There was a handful, they were all really really awesome, you know.  This was our first time talking to people at labels, we got to meet so many awesome labels.  It was not an easy choice in some regards.  We’re really fortunate to meet so many good people in the “industry.”

AA:  And your from such a small town, so was it really bizarre that such a like major label approached you?

TG:  The fact that we’re in Washington state doing an interview with you after we just played this set — there’s certain aspects of this meal that we’re still digesting, you know. We’re not all just like used to this. We came from Lafayette and the label and festivals and all these shows and people being at the shows and knowing some of the lyrics of the songs – it’s so bizarre.  It’s fucking bizarre, people knew they words of our songs and they’re from Washington state. That is fucking nuts.

AA:  Who’s the producer that you worked with on your album?

TG:  It’s a self-produced album and our friend Korey Richey was our engineer and he would like co-produce the album with us. We had Ben Allen and Chris Coady do all of the mixing. So this album is like this labor of love, we spent so much time producing it and taking the time out to make sure that it felt super, I guess you could say, in line with our full creative vision. We took our time with it. It took about a year and then those guys mixed it, Chris Coady and Ben Allen, and just gave it another dimension with their mixing.

AA:  So, what’s the songwriting process for you guys?

TG:  We get all these bones of these little animals and we shake them and we throw them and depending on the shape that the bones make we’ll determine the key.

[something dusts over us]

TG:  Alas, the oracle has spoken.

KC: [laughs] What the hell was that.

AA:  I don’t even know what that was.

TG:  I’m sorry, I wasn’t really supposed to send the juju out, there will be a new GIVERS song out by tomorrow.  It shall come.

TG:  G. So yeah, the bones determine the key and we check the compass depending on the highest point of the bone that determines the tempo. North is fast and South is slow.

AA:  [laughs] Does it matter what kind of animal you use?

TG:  Oh, we only use — well, I can’t tell you what animal we use but  there’s only one animal that we use.

No, but every song has a different writing process.  Some songs come from free-form jams, some songs come from little ideas that someone will bring the the table – there are really no rules and no limitations to the creative process. Which we think that it should be like that in every band, we’re just lucky that it’s become the case for us. There’s no set rules or anything like that. The only rules that are [adopts something between a gangster and mobster an accent] there are not rules. [laughs] That’s off the record, actually.

AA:  Everything is on the record, sorry.