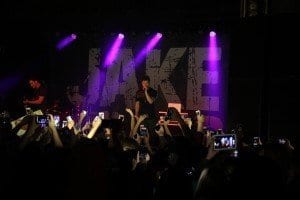 Since turning down college to pursue music full-time, Jake Miller has been soaring high since his move from YouTube to Warner Bros. Records.

The Weston, Florida native released his debut album Us Against Them last year peaking in the top five of Billboard’s R&B/Hip-Hop Albums, Rap Albums and Independent Albums and recently released his single “First Flight Home” followed by his EP Lion Heart.

Inspired by the likes of Drake and Eminem, Miller manages to stun fans with his rap verses and often finds himself swaying between rapper and pop singer, a natural playing field for the singer-songwriter who notes the music he produces comes from whatever he’s feeling at the time whether that’s a go-hard rap verse or a light-hearted positive pop song chorus.

His latest single, “First Flight Home” is chart-topping potential with its smooth pop chorus, heartfelt lyrics about taking a break from fame to return home to the people he loves the most. The song debuted on MTV alongside its official music video which can be viewed here.

“First Flight Home” is a track off of Miller’s latest EP Lion Heart released earlier this month. Miller recently co-hosted the 2014 MTV EMA’s and is currently on tour with the iHeartRadio On The Rise tour with Becky G.

We caught up with Miller at his Detroit show and talked about his latest EP, “First Flight Home” and his rise to fame. Check out the interview below.