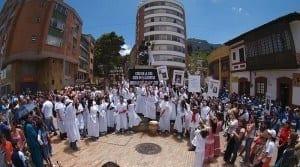 Women celebrate their achievements and think about the future

What does it mean to have an International Women’s Day?

Well, first of all, it means more than getting a Google Doodle. Although, it really is a cute one that incorporates the symbol for the female gender and a flower into Google’s logo.

International Women’s Day has been observed since the early 1900’s, when it began as a tribute to striking garment workers in New York City. Now it is observed annually on March 8th to celebrate women.

Women have taken great strides throughout history, but the past century has been one of turbulent change. Yes, women received the right to vote, Katherine Hepburn and Mary Tyler Moore made pants popular for women, and the 80s bred a new species: the power woman.

But International Women’s Day is about more than those small victories.

Thanks to Rush Limbaugh’s recent rants about law student Sandra Fluke, in which he called her a “slut” and a “prostitute”, women in the United States are thinking a little more carefully about their role in our culture today. Despite the strides we’ve taken, are we equal?

There are still glaring inequalities between the sexes. Of the 793 million illiterate people in the world, two-thirds are female, even though it has been realized that educating girls is one of the most powerful and effective ways to address global poverty. Women are not equally represented in business and government, and there is still that pay gap that refuses to close.

Don’t worry, ladies. We do have a lot to celebrate on International Women’s Day. Not just the achievements of our mothers, grandmothers, and the women before them, but also the things we are doing right now. More women than ever are graduating from MBA programs, which should help move us closer to gender equity in business.

The United Nations declared an overall International Women’s Day theme, “Empower Rural Women—End Hunger and Poverty,” but many organizations and governments develop their own themes that are more relevant to their locales.

No, women have not won every battle yet. But on International Women’s Day we can celebrate the achievements we’ve made, and consider how we can ensure that our daughters and our daughters’ daughters can live in a more gender-equal world.