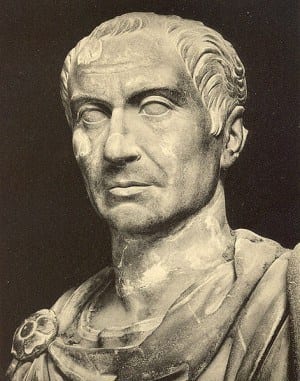 See where it comes from

Today is the day, the 15th of March, the Ides of March. The term refers to the day Julius Caesar was assassinated in 44 B.C. Caesar was stabbed (23 times) to death in the Roman Senate by a group of conspirators (allegedly 60), Y tu Brute. William Shakespeare dramatized the conspiracy with the play Julius Caesar and coined the phrase when Caesar is warned by a soothsayer “beware of the Ides of March.”

An article on NationalGeographic.com notes that, “For ancient Romans living before that event … an ides was merely one of several common calendar terms used to mark monthly lunar events. The ides simply marked the appearance of the full moon.”
But after the assassination of Caesar, “The phrase came to represent a specific day of abrupt change that set off a ripple of repercussions throughout Roman society and beyond.”

The term has taken on a superstitious meaning and curses the day of the 15th. The front page of the Post reads Bad Things Happen Today:  the HBO series Luck has been cancelled, the Taliban have suspended peace talks with the U.S., the Syria situation is only becoming more of a problem, Goldman Sachs lost out and worst of all, Jermaine Jones got the boot from American Idol, coincidence? You decide? And it’s not even noon yet.

Here are 5 other events that feed into the superstitious Ides of March,