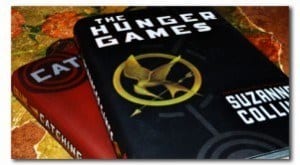 The Hunger Games film premiered this past weekend at the Nokia Theatre in Los Angeles. The film, based on Suzanne Collins’ best selling novel, will debut March 23 for the public. The book has received a slew of awards, from “Best Book in 2008” according to Publishers Weekly and “Notable Children’s Book of 2008” by The New York Times. With such notoriety and a cult following, fans are anxious for the films release.

The Hunger Games’  three stars, Jennifer Lawrence, Josh Hutcherson and Liam Hemsworth hit the red carpet for their movie premiere. Jennifer Lawrence was all business walking in with her dazzling outfit but reverted to the clumsy comedic role once the onstage appearances began. Director Gary Ross introduced her she moved to center stage, and then saw Ross was still talking and scampered back behind the curtain. Ross eventually called her out, and the actress tripped on her way to center stage, “She’s good at comedy, too,” said Ross. As she walked off the stage, Lawrence noticed Hutcherson was poking fun at her walk, so Lawrence gave him The Hunger Games’ three-finger salute and the crowd roared with applause.

The fans of The Hunger Games have been known to be overbearing at times, obsessed with the books, film and actors. Josh Hutcherson rolled around the premiere with a large security guard equipped with an ear piece, “It takes time to get used to it,” he said, “But this is something that has to be part of my life.”

And last but not least, the third star of the film Liam Hemsworth, decided to skip the security guard and bring his girlfriend Miley Cyrus to the event.  Hemsworth said he had “to be picky” in choosing who to bring to the premier and said, “I had to cut out a few people.” Though, he added, “It was tough.” Hemsworth had a private table for the premieres’ after party where some of the friends who got cut out could partake in the party. Cyrus was even left alone at times when rambunctious fans berated Hemsworth for autographs and photographs.