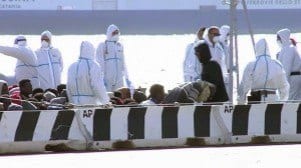 Vessel Sinks off the Coast of Libya

This Sunday, a boat with hundreds of migrants had capsized around 70 miles off the coast of Libya. The ship had sent out a distress signal this Saturday however the ship overturned as rescuers approached.

The Portuguese flagged container ship, King Jacob, was sent immediately to the area by the Italian Coast Guard and deployed lifeboats. The boat capsized as many migrants moved to one side of the ship.

Authorities had earlier reported that there were 700 people aboard though later a Bangladeshi survivor stated that there were about 950 migrants aboard the vessel including hundreds locked into holds within the ship and around 200 women and children.

While the survivor’s account had not been verified, the case that people were locked inside the ship is very likely as very few survivors and dead had been discovered relative to the speed the vessel sunk.

According to prosecutors, passengers on the boat were from a variety of nations, including Algeria, Egypt, Somalia, Niger, Senegal, Mali, Zambia, Bangladesh and Ghana.
In addition to the Italian Coast Guard, 18 ships had joined the effort to locate survivors.

Only 28 survivors and 24 bodies were discovered so far.
Already this year a reported 900 people have died trying to cross the Mediterranean out of 35 thousand migrants.

Spain and Italy bore the brunt of the influx of asylum seekers or migrants, as the empowered right wing parties in Europe call to stem the tide of illegal immigration.

Previous ArticleTHAT'S LIFE: Interview with Nasson ChanceNext ArticleTop 10 Must Have Back to School Dorm Essentials