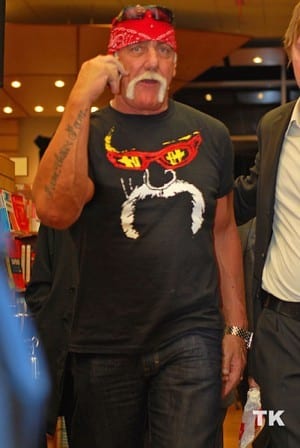 The Hulkster admits to sleeping with best friend’s wife

Hulk Hogan, the pro-wrestling legend and perhaps the poster child for all that was entertaining in the sport to his legion of “Hulkamaniacs,” spoke for the first time about his affair and alleged sex tape on NBC’s Today. The sex tape, which was released last week, occurred six years ago and featured Hulk Hogan doing the deed with the wife of his close friend Bubba the Love Sponge.

Hulk Hogan, 59, said that the affair happened before he was separated from his first wife Linda Hogan, with whom the Hulkster had two children–Brooke and Nick–and appeared alongside the Hogan family on the  VH1 reality show Hogan Knows Best. Citing his failing marriage as a key factor, Hogan claims that the verbal and emotional abuse he received from Linda fueled his adulterous decision to sleep with Heather Clem, the wife of radio host Bubba the Love Sponge.

Bubba, formerly Todd Clem, is a syndicated radio host who legally changed his name to the Love Sponge trademark in 1999. And he’s the Hulkster’s best friend.

In an interview with Howard Stern, Hulk Hogan spilled the beans about his affair with the Mrs. Clem and the alleged sex video. In the interview, Hulk said that Bubba allowed him to sleep with his wife six years ago. The only problem for Hogan was that he had no idea that he was being filmed.

“I had no idea there was a camera in the room,” Hogan said on Today. “I’m not making excuses–I’m accountable, I was the guy, I was there, I made the choice. It was at a really low point in my life when I was in a previous marriage when things were bottomed out completely. I made a wrong choice and now all of a sudden it surfaces over six years later and it’s just appalling.”

Hulk Hogan, who now serves as the general manager of Impact Wrestling, married his second wife, Jennifer McDaniel, in December 2010.