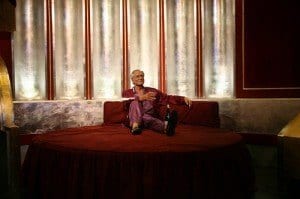 Hugh Hefner is a number of things, from chauvinist to living legend, now another label can be added to his long list of achievements, forgiver.

Hugh Hefner, 86, and former fiancée Crystal Harris, 26, are dating again, according to tweets from Harris Friday.

“Yes I am his #1 girl again,” Harris tweeted. “Yes we are happy. Hope that clears up any confusion.”

Hugh Hefner and Crystal Harris first became engaged in December of 2010 after two years together. The two were scheduled to wed before 300 guests in June of 2011 but just days before the date, Harris called off the wedding.

Harris would later tell Howard Stern on his Sirius XM Radio show that sex with Hugh Hefner lasted “like two seconds.” Harris added, “Then I was just over it. I was like, ‘Ahhh.’ I was over it. I was just like, walked away. I’m not turned on by Hef, sorry.”

Hugh Hefner, not to be outdone by someone sixty-years his junior, stated in a separate interview that he was relieved he didn’t exchange vows with Harris. “Holly [Madison] suggested that I missed a bullet, and I think it’s probably true,” he told Entertainment Tonight. “Quite frankly, I don’t know what I was thinking about. I think my natural state is single. I’ve tried marriage twice, not successfully. These were not the happiest times of my life.”

What strange lives we all lead.