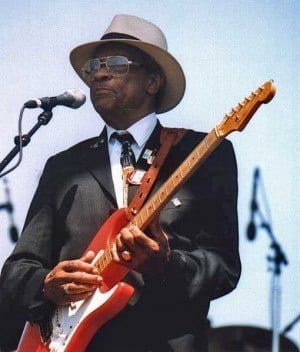 Hubert Sumlin has died at the age of 80 from heart failure.

Rolling Stone reports that Sumlin was Howlin’ Wolf’s longtime companion and influenced countless guitarists, including Jimi Hendrix, Jimmy Page and Keith Richards. Sumlin was inducted into the Blues Foundation Hall of Fame in 2008.

Hubert Sumlin was born in Mississippi, raised in Arkansas and moved to Chicago to play with Howlin’ Wolf. Sumlin played on the well-known songs “Wang Dang Doodle,” “Spoonful,” “Killing Floor” and “Back Door Man.”

Sumlin was diagnosed with lung cancer in 2002.