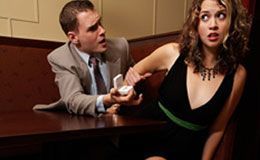 Breaking up is hard to do. So why not let College News make it a little easier for you?

So you screwed up. You totally fell for the hottie in your Chem lab. Then things got hot and heavy pretty quick.  But now all of their cute little habits are starting to drive you insane and you’re thinking it’s time to jump ship. Fair enough. But before you pull the trigger on your romance, here are some dos and don’ts of breaking up.

Rule number one, no matter how convenient it might be for you. DO NOT end your relationship via text message, Facebook wall post, or instant message. Anything you put into writing is going to be forwarded, or copied and pasted, to every one of your ex’s friends.  Not only will you be taking the easiest, most cowardly way out, but everyone is going to know about it.

Which brings me to my next point.  Whether you were seeing this person for a day or a year, BREAK UP WITH THEM IN PERSON.  Don’t have your best friend relay the message and unless you live cross country from each other, don’t do it on the phone either. Breaking up with someone in person shows them that you care enough to go out of your way to talk to them face-to-face and that you’re not a huge coward.

That being said, be careful when choosing a time and place to give them the news. Don’t break up with them on their birthday, or in the middle of a bar. Keep in mind that, even if you two weren’t all that serious, rejection hurts. So try not to be insensitive to his/her feelings and talk to them in private. This way they won’t be embarrassed in front of their friends and you won’t look totally heartless.

Let’s say, though, that you’re a bit hesitant to drop the break-up ax, regardless of the venue. When you finally get down to it, be honest.  It’s okay to let someone know that you’re just not that into them.  At the same time, don’t bust out the ‘it’s not you, it’s me’ speech, because everyone knows that’s never the case.

You don’t need to be mean, but don’t try to sugarcoat it either. They might not be happy, but they’ll appreciate you giving it to them straight rather than making them wonder what actually went wrong.

Additionally, don’t think your work is done just because you told them it’s over. You need to be careful what you do post-breakup as well.  For example, when your on the rebound. As exciting as it may be to be newly single, try not to make out with your ex’s best friend the next night.  You don’t want to burn any bridges or give your ex a reason to hate you.  You might not remain best friends, but you should at least try to be civil to each other.

Besides…someday soon, you may even want to give it another try.