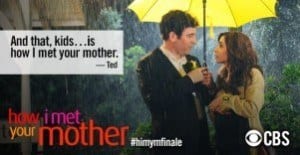 SPOLIERS FOR EVERYTHING EVERRRR

It has been a week since the series finale of How I Met Your Mother aired, and as is common practice these days, everyone on the internet freaked out about it. The general public (or at least the more vocal social media portion of it) seems to feel robbed by the ending of the series, for some even ruining How I Met Your Mother as a whole. If you want an example of angry How I Met Your Mother fan-splosions, look no further than the comments section of any Facebook post from the show’s account.

How I Met Your Mother‘s finale fan rage is nothing radically new of course. We as a collective 2014 culture place a lot of stock into our pop culture; especially as far as series finales are concerned. The television milieu of the past several years has positively changed but I think it’s safe to say that we have always been pretty critical of series finales, for better or worse.

If Lost or The Sopranos ever comes up in casual conversation, you can bet your last jar of Dharma Initiative mayonnaise that somebody is going to steer the dialogue into “Worst Finale Ever” territory. When Breaking Bad’s finale aired in October, Lost showrunner Damon Lindelof received a legion of tweets that simultaneously denounced his show’s finale while praising Breaking Bad’s. What is it about that final episode of a series that stirs such emotion in us as a viewing collective? Is it some strange form of survivor’s guilt? Are we evaluating our TV finales accurately?

Generally what loyal fans want from a series finale is closure – IE will Walter White get his come-uppance for his methy ways, will Ross end up with Rachel and most importantly, will we get some goddamn answers to the goddamn questions we’ve been having this whole goddamn show? Asking for that kind of closure can be tricky though; in a way you’re holding the series hostage and making a list of demands that it must accomplish before it comes to a close. Also, expecting the final episode of a series to be the best one is probably a fool’s errand. We all learned story structure in grade school right? There’s no way that the conclusion is going to be as thrilling as the climax that precedes it. (IE Breaking Bad’s “Ozymandias” > “Felina.”)

More important than specific plot points and story beats is the overall theme and message that the finale sends. Does it gel with what we have been presented up to this point? Breaking Bad was a show of consequences, and we might not have loved the finale as much if the soul of the show Jesse Pinkman didn’t escape while the soulless Walter White lived to fight another day. Probably what upset How I Met Your Mother fans the most was a combination of unwanted closure (Ted ending up with Robin after seemingly haven gotten over her) and thematic betrayal (from the viewers’ perspective, “the Mother” was killed off shortly after she met Ted on screen.)

To properly wrap it up, let us take a look at possible definitions for what a series finale actually is.

Definition A: The Finale is The Last Will and Testament of the Show

Definition C: The Finale is an acceptance speech that goes on way too long

Definition D: The Finale is a drunk rock star that grabs its crotch, screams “F*#% you!” and exits stage right

Definition E: The Finale is like life because you never know when you’re going to get cancelled

The How I Met Your Mother finale may be filed under each of these definitions depending on who you ask. Right now everyone is still up in arms about it, but maybe it will die down eventually? Then again, this is the internet we’re talking about, where mistakes live forever!

Finales may bring us to tears of joy or fill us with infinite rage; but perhaps now you’ll have a better handle on why you’re feeling all the feelings.