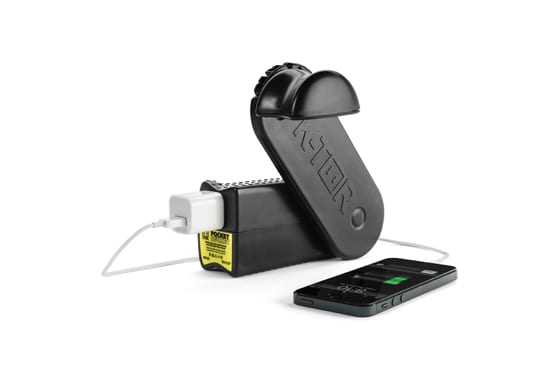 Human driven generators have been in existence for over 100 years but with the advent of wall outlets, the power grid, rechargeable and disposable batteries they fell out of popularity.

Recently the renewed interest in green energy and the realization that there are many situations, such as emergencies, adventuring and living off the grid, where they are indispensable they are again growing in popularity. This has also happened in parallel with the explosive growth of portable electronics devices that have become indispensable and are limited by their battery life.

K-Tor was born in 2008 by Ken Torino an electrical engineer who was caught once to many times with a dead battery while traveling and camping. It was not possible to buy a device as they did not exist and so Ken created K-Tor with the idea of making a highly functional modern design hand crank and pedal generator. These were developed after extensive development and testing as the Pocket Socket hand crank generator and Power Box pedal generator and the realization of that vision. K-Tor started with extensive experimentation of the human. In the case of a hand crank what was the optimum crank length and power. The shorter the crank length the easier it was to turn fast but the harder to crank, the longer the easier to turn but harder to turn fast. The optimum was found via experimentation.  The design goal for K-Tor was to be able to take a cell phone and bring it back from the dead and allow some one to hand crank in a reasonable amount of time and keep a cell phone powered without plugging it in for an indefinite amount of time. It was also a design object to use the most universal interface and the standard wall outlet. Also by going through the wall charger supplied by the product maker it is the safest as these devices are designed to work with the battery they are charging. A universal solution is hard to achieve and the wall outlet is the closest thing to it.  The shortcoming of the crank is and continues to be the human body. In producing human power you want to use the largest muscle possible. The K-Tor hand crank is the best on the market using the arm and hand to crank vs others that use the wrist and fingers but the upper body can only produce so much and it is more like doing reps in the gym., three minutes and rest and three minute  and repeat for about thirty total. Thirty minutes charging at the same rate as plugging in a wall outlet is enough to keep you going day-to-day four minutes enough to bring a dead cell back to life for an emergency call. It is ideal for emergency use or day hiking or other similar uses.

For those that want to create more energy on a sustained basis pedaling is the way to go. Pedaling can be done for long periods of time comfortably even at heavier loads. The challenge in designing a pedal generator is to make it smaller lighter and less expensive so that it is more usable. The few that existed were the size of exercise bicycles and cost thousands. K-Tor did extensive experimentation and testing in developing and creating its pedal generator that is a huge leap forward in pedal generator design. K-Tor in its goal to make human power more available created its award winning pedal generator that folds to the size of a shoe box, is less than five lbs. and is less than $200.  It produces 20 watts that is plenty for most portable electronics up to and including tablets. It can also be used with a 12 Volt charger to charge small 12 volt batteries and run larger devices.

K-Tor is now the world leader in human power products and has delivered tens of thousands all over the world. Whether you keep one at home for emergencies or it is your life line while on an expedition or in the Peace Corp they are indispensible in keeping communications operating, whether a cell phone, satellite phone or ham radio as well as the wide range of other indispensible portable electronic devices.

More information and a number of videos can be found on their web site k-tor.com and their you tube channel k-tor.  You can also talk to Ken the owner/inventor at 802 777 6229 his personal cell phone for advice or technical information or help.

K-Tor products are made in the US and they ship anywhere in the world.  You can also email ken at info@k-tor.com .