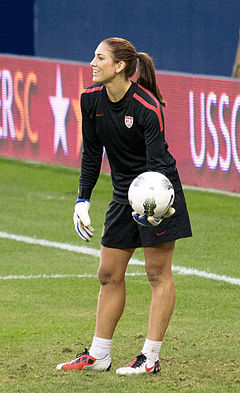 It turns out Hope Solo saves her good sportsmanlike conduct for the field only.

After the Olympic soccer star was eliminated from “Dancing With the Stars” Tuesday evening along with her pro partner, Maksim Chmerkovskiy, things took a turn for the worse for the pair.

According to Us Weekly, the 30-year-old did one TV interview and then refused all other press opportunities and burst into tears, one eyewitness tells Us Weekly.

Before her outburst, Solo told “DWTS” host Tom Bergeron she was grateful for her time on the ABC series. “This competition is one of the toughest competitions I’ve ever been a part of,” Solo said. “It was an amazing opportunity. We have the most amazing fan base and instead of winning the mirrorball trophy, I’m going to try to win a gold medal this summer at the Olympics.”

Solo complimented her partner, outspoken Chmerkovskiy, although he almost made her quit the show.

“Maks put so much into [our Monday night] Argentine tango and it’s something to be proud of,” she told Us Weekly after performing Monday.

The “Dancing With the Stars” finale show airs next Monday and Tuesday night on ABC.