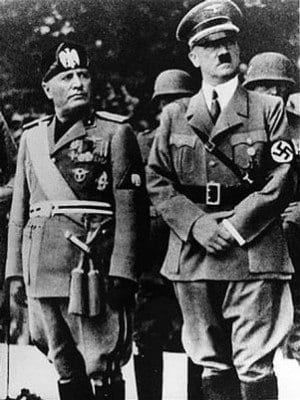 Nazi leader, Adolf Hitler, protected one Jewish vet during World War II. The German dictator led the genocide of all Europe’s Jews, but he wrote a letter to save one Jewish vet, Ernest Hess, a judge, because the two had served together in the military.

The letter was found in an official archives that contain files that the Gestapo, the Nazi secret police, kept on Jewish lawyers and judges. On August 19, 1940, the letter was signed and dated by a member of the SS paramilitary organization.

In a recent interview, Susanne Mauss told the Associated Press, “There had always been rumors, but this was the first written reference to a protection by Hitler.”

Although Hitler protected Ernest Hess, the rest of his family, unfortunately, did not share the same luck. Ernest Hess’ sister was one the millions of innocent people who were ruthlessly murdered at the Auschwitz concentration camp.

Although Ernest Hess was protected from being savagely murdered, he had not completely escaped harm’s way as he was sent to a forced labor camp during the war from 1943 until 1945.

After the war, Ernest Hess declined the offer the return to his pervious position as judge, and he chose to work for the federal railways instead. Hess passed away in 1983.

Historian at the University of Aberdeen in Scotland, Thomas Weber, who has been published on the Nazi era, shared his thoughts on the protection letter.

As Hitler and Hess did serve in the same unit together, Weber agrees that it is likely that the letter was genuine. However, he is skeptical that the letter’s order to “not harass H. in any way” came directly from Hitler. Instead, Weber believes the protection letter actually came from someone who felt it would have been Hitler’s wish for Hess to be protected.

Weber stated, “But I can’t exclude that Hitler intervened [on behalf of Hess]. We do know that Hitler felt very close to the veterans of his regiment.”

However, Hitler’s close feelings with the veterans in his unit was not mutual, according Ursula Hess, Ernest Hess’ 86-year-old daughter. Recently, Ursula Hess told Jewish Voice From Germany that Hitler had no friends in the regiment.

Whether Hitler protected the Jewish vet or not, does not change that fact that he led the genocide of all of the Jews in Europe and brutally murdered millions of innocent people.

Jewish Voice From Germany publisher, Rafael Seligmann, stated, “History won’t need to be rewritten because of this.”