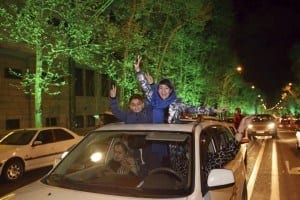 After nearly 18 months of talks, Iran has agreed to a framework of cuts to its nuclear program in exchange for lifted sanctions by the European Union and the United States. The talks had continued nearly day and night for the last eight days in Switzerland.

The talks concluded on the last day of Nowruz, the Iranian New Year. The deal was the result of nearly one year of secret negotiations between the United States and Iran.

The countries involved in the talks besides Iran were United States, Britain, France, Germany, Russia and China.

The deal pledges that Iran will make significant reductions in centrifuges, which are machines that can spin uranium gas to levels used in nuclear warheads. The country would be allowed to operate just over 5,000 which is a sharp drop from the 20,000 operational centrifuges in Iran at the moment.

Much of its enriched stockpiles would also be neutralized. A planned reactor would be reconstructed so it produced no weapons-grade plutonium and converted to a nuclear physics facility for civilian use. Monitoring and inspections by the UN would also be allowed.

The deal was met with caution but accepted by Britain, Germany, France and Italy –key European allies to the United States–

“We are closer than ever to an agreement that makes it impossible for Iran to possess nuclear weapons,” German Chancellor Angela Merkel said. “That is a great credit to all negotiating partners.”

Indian spokesman for the External Affairs Ministry Syed Akbaruddin stated, “The announcement yesterday underlines the success of diplomacy and dialogue, which India has always supported and which we hope would lead to a comprehensive agreement by June 30.”

However the deal also has its critics.

The Republican controlled Congress were sharply against the negotiations and noted that they would refuse to work with a deal and any deal made would be temporary so long as Obama is in office.

See Senator Tom Cotton’s (R-Ark) open letter to Iran which was also signed by 47 other senators.

House Speaker John Boehner said it would be “naive to suggest the Iranian regime will not continue to use its nuclear program, and any economic relief, to further destabilize the region.”

Recently reelected Israeli Prime Minister Benjamin Netanyahu (and the Republican Congress’s MVP) told Obama a deal based on the agreement “would threaten the survival of Israel.”

In response to opposition to the deal Secretary of State John Kerry had this to say. “Simply demanding that Iran capitulate makes a nice sound bite, but it is not a policy, it is not a realistic plan,” Kerry said.

The final deal will be made on June 30, and until then things could change and the negotiation could have been for naught.

However if a deal is secured, then this part of Obama’s legacy as president would have him curb Iran’s development of nuclear weaponry or have him secure “peace in our time.”