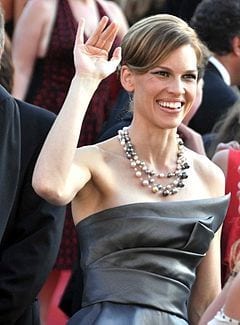 The Oscar winner faces tough after math of Kadyrov birthday

After receiving a month’s worth of bad press for attending the birthday party of Chechen president and alleged human rights violator Ramzan Kadyrov, actress Hilary Swank has been dropped by her PR team at 42West.

According to Entertainment Weekly, the publicity firm decided to part ways after a disagreement with the two-time Oscar winner on how to best deal with the aftermath of the Oct. 5 event.

After being widely criticized by human rights groups for making a paid appearance the event, the 37-year-old actress promised to donate the fee to charity. Eventually Swank fired her manager of eight years, Jason Weinberg, along with two of his associates that had also done work for her. Swank surprisingly did not fire her lawyer, Jeff Bernstein, who reportedly played a large role in arranging the Chechnya visit.

Swank has issued a statement of apology for attending the event. “If I had a full understanding of what this event was apparently indended to be, I never would have gone,” she said.

In 2009, Kadyrov announced his approval of honor killings, based on his belief that women are the property of their husbands. Kadyrov is suspected of being involved in several cases of torture, abduction and murder.